‘We feel cut off’ 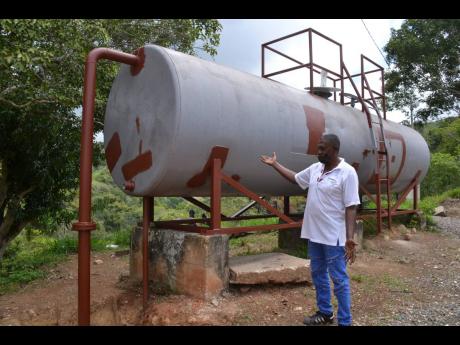 Errol Crosby
Devon Wilks, president of the Ginger Ridge Community Development Committee (CDC) in Browns Hall, St Catherine, points to the water tank that was acquired through the effort of that organisation.

President of the Ginger Ridge Community Development Committee (CDC), Devon Wills, has raised concern about the water crisis afflicting several St Catherine districts and is appealing for the intervention of the authorities.

“We need the promised water system to be done now to ease the plight of residents. We have been deprived of the source that we had, as it was taken out of commission for repairs and to be added to the proposed system,” Wilks said.

Wilks said that the tank, which had a 3,000-gallon capacity, was acquired with the input of the CDC, which sought and secured it for the communities.

“When the tank was the source, the St Catherine Municipal Corporation would truck water here. Now, it’s dry and the communities are left to depend on rainfall or privately trucked water,” Wilks said.

The local community representative said while he understands that Member of Parliament Dr Christopher Tufton has organised for the laying of pipes, urgent help is needed now.

The water woes have been compounded by the deplorable road conditions.

“The other day, a resident asked for water to be trucked and couldn’t get it, as the truck man said he couldn’t navigate the road,” Horace Taffe said.

The alternative route along the Sandy Ground to Bellfield road, which collapsed at a point 11 years ago, continues to be a stumbling block.

“We feel cut off,” Wilks said.

The committee president said that as a result of the water shortage, householders have been migrating to other communities to feed their families.

“We are troubled by the lack of this basic commodity. We are in need of the water to make residents of the respective communities live better,” Wilks told The Gleaner.