All violence matters... Juliet Holness says too much focus on gender 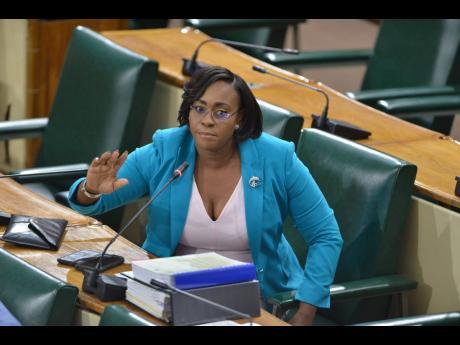 Holness: We need to stop seeing acts of violence in a partisan or a gender specific way so we can address the root of our problem.

A tweet from government lawmaker Juliet Holness that violence in Jamaica should not be analysed through partisan and gender perspectives has triggered intense criticism by many online users.

Except for Gender Affairs Minister Olivia Grange, it was the first major comment from a female parliamentarian of the ruling Jamaica Labour Party since their colleague MP George Wright, became ensnared in an assault scandal threatening his Gordon House membership.

Holness, the MP for St Andrew East Rural and wife of Prime Minister Andrew Holness, argued on Twitter Tuesday that focusing on gender was not helpful in addressing the country's violence problem.

“We need to stop seeing acts of violence in a partisan or a gender specific way so we can address the root of our problem, which continues to affect every class, race, gender, political or sexual orientation.”

We need to stop seeing acts of violence in a partisan or a gender specific way so we can address the root of the problem which continues to affect every class, race, gender, political or sexual orientation. WE HAVE A NATIONAL VIOLENCE PROBLEM WHICH REQUIRES A NON VIOLENT SOLUTION

Noting the prime minister's push to abolish corporal punishment from his days as education minister, she added: "Many of our institutions have perpetuated violence, inclusive of our education system, our domestic practices, and some of our disciplinary beliefs.”

Most of the responses were highly critical of the lawmaker.

"Let's not ignore the inherent misogyny that pervades the Jamaican society, or ignore the derogatory nature by which most negative comments are genderised female or labelled with effeminate terms," argued @IngeniusRandom.

Another commenter, Sharine Taylor, said, "This is by far the worst take."

Several others said the solution for violence could not be through a one-size-fit-all approach.

"The amount of women in Parliament means absolutely nothing if this is how they think," replied @itsacelebrashan.

@ItSaRbelLove said she was shocked by the MP's comments.

"So all those missing girls, rape cases, street harassment, domestic violence and murder-suicide stories of our women mean nothing to you?" she said.

@shauntanerr said: “I hear what you’re saying but the women missing everyday can’t.”

Ambrosia was scathing of the deputy speaker of the House of Representatives.

"A female politician, with access to the halls of power to make change ... wants us to focus on violence in general, while police officers mock women who make domestic violence reports ... this can't be mere incompetence. It's not just misogyny. This is systemic disenfranchisement & endangerment of women."

Mrs Holness' comments came almost simultaneous with the prime minister’s statement in Parliament in which he reaffirmed his administration’s intention for specific measures to respond to gender-based violence.

He noted the launch of a 10-year strategic plan, the establishment of shelters for abused women, review of laws, and a partnership with European Union and the United Nations’ Spotlight initiative to supported abused women and girls.

“Every perpetrator of gender-based violence should be punished,” he said, declaring that it was one aspect of the "epidemic" of violence across Jamaica.

The 18 female parliamentarians also issued a joint statement in which they called for action to deal with gender-based violence which, they say, "has been a scourge on our society over many years".

"We feel the urge at this time to come together in solidarity with our sisters, women, who are in the line of fire from the lethal forces of domestic violence," the statement read.

Mrs Holness may have seen things differently in 2020 when she tweeted that violence against women was "one of the most persistent and devastating human rights violations in our world and remains largely unreported due to the impunity, silence, stigma and shame surrounding it".

Some key stats on Jamaica and gender-based violence:

*More than one in every four women in Jamaica has experienced intimate partner physical and sexual violence in their lifetime.

*One in every four women experiences physical violence alone at the hands of a male partner.

*Twenty-three per cent of women aged 15-49 years experience sexual violence perpetrated by someone other than an intimate partner at least once in their lifetime.

*Two out of 10 girls aged 15-19 think it fine for a husband or partner to hit their partner.

*Eighty-five per cent of children experience violent discipline at home.
Jamaica (11 per 100,000) has second highest rate of femicide (killing of women/girls because of their gender) the in world; El Salvador was first (13.9 per 100,000) – UN 2019 report