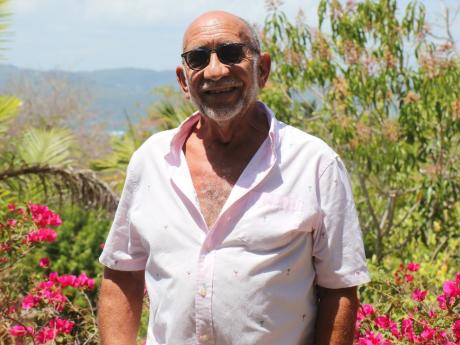 Moyston: "My concern really is that we are open to the United States, all travel, no restrictions, only travel with a negative COVID test on arrival. ... It doesn't make sense when the most dominant strain in the US is now the B.1.1.7." - Ashley Anguin photo.

The Jamaican Government has been criticised for its four-month ban on inbound passenger traffic from the United Kingdom on the grounds of a coronavirus variant.

That pushback has come from Anthony Moyston, husband of one of the 27 Jamaicans aboard a London repatriation flight en route to the Norman Manley International Airport in Kingston.

It is scheduled to arrive some time after 3 o'clock this afternoon.

A travel ban was imposed days before Christmas as news emerged of the UK variant being more highly contagious, but not necessarily more lethal, than other strains of the virus that has crippled global commerce and killed more than three million people worldwide.

Moyston has taken issue with the decision to extend a ban on flights from the UK while leaving the borders open to US travellers.

Data collected by the Centers for Disease Control and Prevention show that the UK variant is most common in the United States.

According to the COVID-19 data tracker, the SARS-CoV-2 B.1.1.7 variant accounted for 44.7 per cent of the positive cases in the US between January 3 and March 27.

"My concern really is that we are open to the United States, all travel, no restrictions, only travel with a negative COVID test on arrival. ... It doesn't make sense when the most dominant strain in the US is now the B.1.1.7," Moyston told The Gleaner on Wednesday morning.

He said that he was also concerned about limited information the 27 repatriated Jamaicans have received.

The passengers will be sent to a state facility for quarantine at no charge, but Moyston, who resides in Montego Bay, said that he had received no specifics on where his wife, Kate, would be accommodated.

He said that his wife has very specific dietary needs.

“The Government has not paid us the courtesy to provide information as it regards to where she will be in quarantine.”

Minister of Foreign Affairs and Foreign Trade Kamina Johnson Smith said in a late-morning press statement that an additional 66 persons in the UK are waiting to return to Jamaica.

The UK travel restrictions, which are scheduled to expire on April 30, have been extended several times since they were first imposed on December 22, 2020.