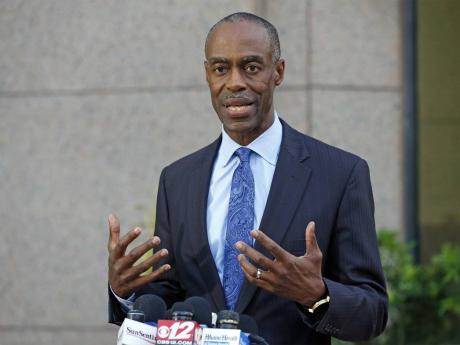 Runci was charged with one count of perjury in an official proceeding, a third-degree felony. His attorneys today filed a motion to dismiss in the Broward County Circuit Court - Contributed photo

Jamaica-born Robert Runcie, the superintendent of public schools in Broward County, Florida, is denouncing a perjury charge filed against him arising from testimony at a grand jury.

He was charged with one count of perjury in an official proceeding, a third-degree felony, and Myrick was arrested on a felony charge of unlawful disclosure of statewide grand jury proceedings.

Runcie was subsequently released on his own recognisance.

The authorities indicated that Runcie was indicted arising from testimony he gave at a grand jury looking into the massacre at Marjory Stoneman Douglas High in Parkland in 2018.

The grand jury was impanelled in 2019 by Florida Governor Ron DeSantis after a teenage gunman with a semi-automatic weapon killed 17 staff and students and wounded 17 others.

Runcie was the superintendent at the time of the mass shooting.

The grand jury’s primary focus was to review school safety in the wake of the shooting, but it was expanded to include corruption and mismanagement in school-district operations.

Agents from the Florida Department of Law Enforcement arrested Runcie, 59, for testimony he gave to the grand jury on March 31 and April 1.

The indictment stated that he gave untruthful testimony before the grand jury.

The Florida Attorney General’s Office released the indictment but said it would provide no other information.

Subsequent to that, Runcie’s attorney, Jeremy Kroll, released a statement on Wednesday afternoon saying that his client’s indictment and arrest were politically motivated, according to a report from the Miami Herald.

“It’s a sad day in Broward County and across Florida when politics becomes more important than the interests of our students,” Kroll was quoted as saying.

The attorney reportedly added that the indictment does not “shed any light on what false statement is alleged to have been made".

“Mr Runcie will enter a plea of not guilty to the charge. We are confident that he will be exonerated, and he intends to continue to carry out his responsibilities with the highest level of integrity and moral standards as he has done for nearly 10 years in his role as superintendent,” Kroll reportedly said.

They argued that the matter should be thrown out unless the authorities release information to substantiate the indictment.

Runcie and Myrick are due in court on May 12.