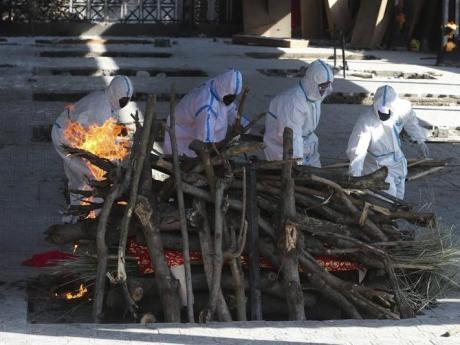 Family members of a person who died due to COVID-19 perform the last rites at a crematorium in Jammu, India, Monday, April 26, 2021. (AP Photo/Channi Anand)

NEW DELHI (AP) — Dr. Gautam Singh dreads the daily advent of the ventilator beeps, signaling that oxygen levels are critically low, and hearing his critically ill patients start gasping for air in the New Delhi emergency ward where he works.

Like other doctors across the country, which on Monday set another record for new coronavirus infections for a fifth day in a row at more than 350,000, the cardiologist has taken to begging and borrowing cylinders of oxygen just to keep his most critical patients alive for one more day.

On Sunday evening, when the oxygen supplies of other nearby hospitals were also near empty, the desperate 43-year-old took to social media, posting an impassioned video plea on Twitter.

“Please send oxygen to us,” he said with folded hands and a choked voice. “My patients are dying.”

India was initially seen as a success story in weathering the pandemic, but the virus is now racing through its massive population of nearly 1.4 billion, and systems are beginning to collapse.

SOS messages like the one Singh sent reveal the extent of panic in a country where infections are hitting new peaks daily.

In addition to oxygen supplies running out, intensive care units are operating at full capacity and nearly all ventilators are in use. As the death toll mounts, the night skies in some Indian cities glow from the funeral pyres, as crematoria are overwhelmed and bodies are burned outside in the open air.

On Monday, the country reported another 2,812 deaths, with roughly 117 Indians succumbing to the disease every hour — and experts say even those figures are likely an undercount. The new infections brought India’s total to more than 17.3 million, behind only the United States.

“I feel helpless because my patients are surviving hour to hour,” Singh said in a telephone interview. “I will beg again and hope someone sends oxygen that will keep my patients alive for just another day.”

As bad as the situation is, experts warn it is likely to get worse.

The White House said the U.S. is “working around the clock” to deploy testing kits, ventilators and personal protective equipment, and it would seek to provide oxygen supplies as well. It said it would also make available sources of raw material urgently needed to manufacture Covishield, the Oxford-AstraZeneca vaccine made by the Serum Institute of India.

“Just as India sent assistance to the United States as our hospitals were strained early in the pandemic, we are determined to help India in its time of need,” President Joe Biden said in a tweet.

Germany’s Health Ministry said it was “urgently working to put together an aid package” for India consisting of ventilators, monoclonal antibodies, the drug Remdesivir, as well as surgical and N95 protective masks.

But many say it is too late — the breakdown a stark failure for a country that boasted of being a model for other developing nations.

Only three months ago, the country’s leaders were boisterous, delivering messages that the worse was over.

In January, Prime Minister Narendra Modi declared victory over the coronavirus, telling the virtual gathering of the World Economic Forum that India’s success couldn’t be compared with anywhere else.