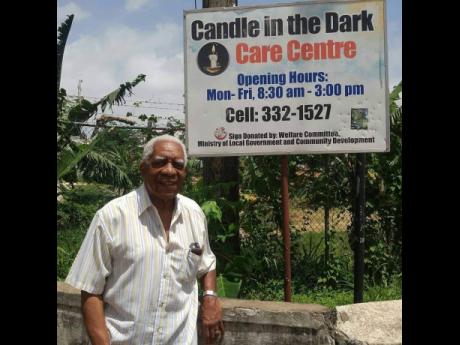 Contributed
Dr Arthur Reid outside the compound of the Candle in the Dark Ministries some years ago.

For years, Dr Arthur Reid and his late wife, Jennifer Reid, catered to the well-being of the homeless in Mandeville at Candle in the Dark Ministries. But today, his illnesses have rendered him incapable of doing much but contend with a compromised quality of life and mounting medical expenses.

Already having comorbidities, the 85-year-old’s health began to significantly deteriorate after a fall earlier this year and suffered intracranial haemorrhage – bleeding within the skull.

“He was rushed to the University Hospital of the West Indies (UHWI) for an emergency procedure, but once he got there, he suffered complications and they had to put in him in the ICU (Intensive Care Unit) on life support for multi-organ dysfunction,” said his daughter, Jennifer Reid-Spinelli.

Reid-Spinelli told The Gleaner that due to a risk of her father possibly contracting the coronavirus with his compromised respiratory system, he was discharged after a month, on the advice of a doctor.

But not only has the family now accrued expenses totalling US$2,000 monthly to care for Reid at a private facility, they are buckling under the pressure of a debt in excess of $3 million at the hospital.

Another of Reid’s daughters, Heather Reid-Spinelli, said that a company her father previously worked with discontinued his health insurance, forcing him to use his pension and savings, which have now dried up.

“The company found a loophole to get rid of his insurance, and at his age, already with his comorbidities, he was unable to secure health insurance for himself. His medical expenses were being serviced from his pension and supplemented by us and his family,” she told The Gleaner.

With an impending surgical procedure to insert a feeding tube once Reid stabilises, his daughters say they just want to give him the best care.

“We are just taking it day by day to see what happens. I don’t know that he would be stable enough for us to take him back to Canada and so we just want to give him the best possible treatment here … . We are just hoping that as a man who gave selfless service that there are people who may want to support him in his time of need. I know everyone won’t be able to help in this time, but even the smallest bit helps,” said Jennifer.

Reid, who was formerly employed to a bauxite company in Jamaica, migrated to British Columbia, Canada, in his early years and spent a significant part of his life working as a senior development and analytical chemist.

He eventually returned to home to the same bauxite-mining company before going into private consultancy, and later co-founded what would later be the Candle in the Dark Ministries with his wife from 1995 to 2018.

The doors of the shelter closed briefly when his wife died and reopened a few months later.

Reid, who was funding some of shelter’s expenses from pocket after his wife died and they lost some sponsorship, could no longer manage and sought the assistance of the former Manchester Chamber of Commerce President Wendy Freckleton, who later took over the reins in 2019.

To assist Dr Arthur Reid, you may make a contribution to https://gofund.me/e30b55f2 or email jennifer.acscontracting@gmail.com.