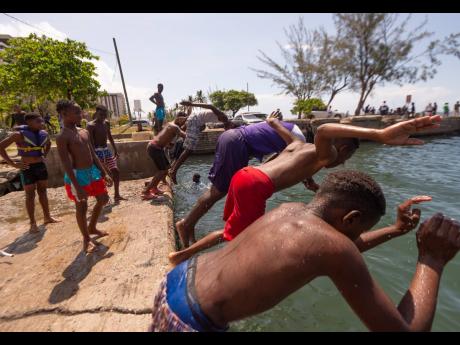 Gladstone Taylor
Scores of young men and women from the community of Parade Gardens spend their free time swimming and diving along the Kingston waterfront. 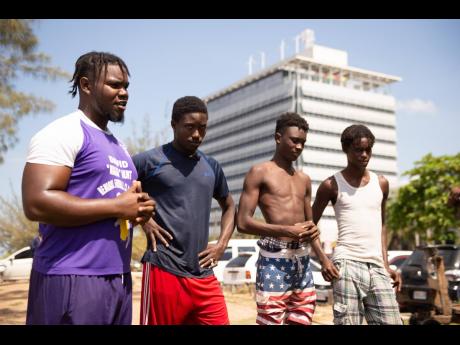 Gladstone Taylor
From left: Kareen Bennett, Akiva Murray, Thierry Tomlinson and Kadeef Clarke are among scores of young men and women from Parade Gardens who fill their spare time with the activity of diving at their regular spot on the Kingston waterfront. 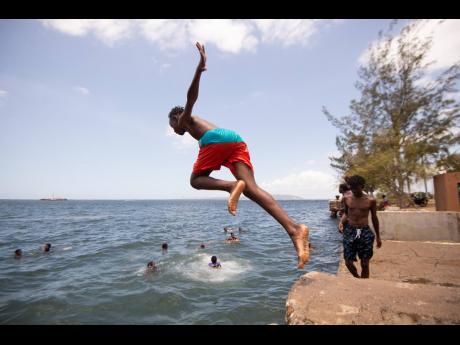 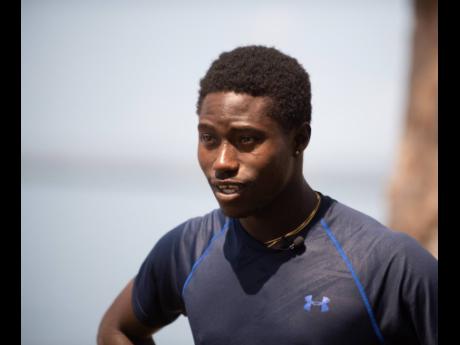 Gladstone Taylor
Akiva Murray says ‘It is a very regular thing for us to save people from drowning’.
1
2
3
4

For some, diving may be regarded as a risky activity, but in one inner-city community in Kingston, it is being used, though not initially intended, as a tool to steer young men away from crime.

On any given Sunday, more than 20 youth from the Parade Gardens community, some as young as five years old, can be seen swimming and showing off their diving skills on the waterfront in downtown Kingston.

Propelled by their love and passion for the activity, the group, who calls themselves the ‘Waterfront Swimmers’, meets regularly to swim, dive and teach others from their community who are interested, how to swim and dive.

On Sunday, The Gleaner caught up with the group on the waterfront.

“For most of us, our love for swimming started from our parents. Most of them did the same thing in their younger days. They went swimming, and some of them were even fisherwomen and fishermen, so the sea is a part of us,” said 20-year-old Caribbean Maritime University student Kareen Bennett.

This love, he said, has kept many young men in the community out of trouble and has steered them away from getting involved in gangs.

“In the past, the deadliest time in our community was on a Sunday. Now that has changed, with most of the younger youth coming here to swim. It has taken away all that idle time for them to do anything negative.

“So far, a lot of the crime has been going down. We are not saying it is gone, but slowly but surely we hope it will be gone,” Bennett shared.

But for the group of young men, gathering on the waterfront is not just all about fun and frolicking. Besides equipping other youth with a useful skill, they also serve as lifeguards when needed.

“Recently, we saved two brothers from drowning. They came to fish in the harbour and got into difficulty. One brother decided that he was not going to let his brother die, even though he himself could not swim, and so he went to help his brother and we had to save the both of them.

“There was also a third person, a passer-by, who went to help the brothers. We sad to rescue him too after he got into difficulty,” Bennett recalled.

“It is a very regular thing for us to save people,” 24-year-old Akeiva Marray chimed in.

For him, learning to swim is very important.

“If we never deh out here a lot of people would a drown, so we learn to swim professionally even though we don’t have the paper, but we can swim good so that we can help people from drowning,” he stated.

“It is good to learn, so if you come down here you can save somebody, too,” Murray added.

For Bennett, he agrees with the recommendation from his father that all Jamaicans should know how to swim, as they live on a tropical island which is surrounded by water – and anything could happen.

Bennett, a trained lifeguard, explained that the older youth like himself usually teach the younger ones, and that they encourage not only the males in their community to learn to swim and dive, but the females as well, and a few of the have made use of the opportunity on occasions.

Among those who have benefited from the swimming lessons is Thierry Tomlinson, a 17-year-old student from Kingston College.

For the most part, swimming and diving are primarily activities that they love and enjoy doing together, but most of them would love an opportunity to delve further into the sports.

They said they would welcome the chance to swim or dive for a club, or to represent the country at a swimming meet, or even at the Olympics.

“If the opportunity comes I will take it,” they echoed.

“I would love the opportunity to go as far as I can go,” Bennett said.

“Just come and check us out and give us an interview and we show you our skills, if [are] you interested,” Murray said.

Interested persons can check out the group’s social media page on Instagram under the tag Waterfront Swimmers.