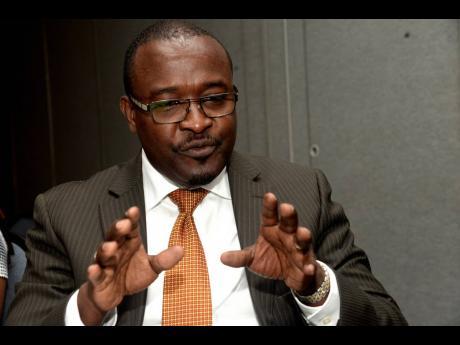 (In photo) HEART chairman Edward Gabbidon. HEART has awarded at least $40 million in contracts to SynCon Technologies, a company for which he is also the chief executive officer.

The Opposition says it is alarmed by reports of conflicts of interest and breaches of good governance principles in the Education Ministry.

HEART has awarded at least $40 million in contracts to SynCon Technologies, a company for which the agency's chairman, Edward Gabbidon is the chief executive officer.

“The public would have expected that, after the scandalous dealings at the Caribbean Maritime University resulting in criminal charges against the former Minister of Education and the former Principal of CMU, the Ministry would have scrupulously avoided any further cases of cronyism and self-dealing,” said Brown Burke.

The contractual relationship between HEART and SynCon dates back to 2006, that's before Gabbidon became the chairman of the trust in 2017.

However, in December 2019, the procurement staff at HEART raised concern about a "clear conflict of interest" and sought legal advice on recommendations to award a $2 million contract to SynCon.

HEART has not said whether the legal advice was provided, and if so, what it said.

Brown Burke said the Prime Minister's silence on the HEART issue represents a dereliction of duty.

"The Jamaican people deserve to know whether or not Prime Minister Andrew Holness was aware of or approved such contracts,” said the Opposition spokeswoman.

In the meantime, HEART has said neither its board or the chairman intervened in any of the contracts awarded to SynCon Technologies as they were below the $30 million threshold that required board approval.

HEART also said on joining the board in April 2017, Gabbidon had declared interest in SynCon.

Eight contracts totalling $40 million have been awarded to SynCon since Gabbidon became the chairman of HEART.

Meanwhile, Brown Burke has cited concerns about conflicts of interest involving the Career Advancement Programme (CAP) and the Centre of Occupational Studies (COS) which both fall under the Education Ministry.

Education Minister Fayval Williams has said the issues first raised in a Sunday Gleaner report require clarification and has asked the Auditor General to expand a probe at the ministry to cover CAP and COS.

The Auditor General has been probing the relationship among the Education Ministry, the Cecil Cornwall-led Western Hospitality Institute and the joint committee on Tertiary Education which is also led by Cornwall.

Brown Burke wants a performance audit of CAP programmes delivered through Western Hospitality Institute which has been allocated the majority government funds.

“It is unacceptable that the Prime Minister is yet to make a statement on these matters which are eroding public trust,” she said.