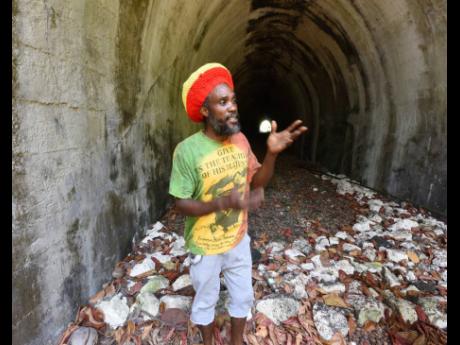 Ian Allen/Photographer
Joel Dyke explains the value of a railway tunnel in Buff Bay, Portland, that was abandoned by the Railway Corporation of Jamaica after the train stopped running in the early 1980s. The tunnel has become an unofficial dumping ground.

Portland businessman Joel Dyke is lamenting the disregard citizens have for a railway tunnel in Buff Bay, calling on residents to desist from dumping garbage there and for the State to recognise it as a heritage site and restore it to its former glory.

The tunnel is located on a beach-front property and was used by the Jamaica Railway Corporation through its railroad transportation system in Portland decades ago but is now an unofficial dumping site.

Located at White Rock in Buff Bay, it is part of Jamaica’s heritage, with its history dating back to 1845 when the country’s railway system was commissioned. But in 1980, during the passage of Hurricane Allen, the entire railroad tracks from Portland through to St Mary suffered significant damage and were decommissioned.

“People from all over – even those driving by – just simply dump rubbish over the side of the roadway, resulting in piles of garbage in the vicinity of the tunnel,” complained Dyke, a resident of White Rock.

“The area is a space visited by university students from time to time to get a first-hand view of the tunnel and also to learn about a piece of the history of the railway system. This tunnel was built decades ago by engineers to facilitate the train and diesel, which were the carriages used to transport people to various destination,” he told The Gleaner.

“Today, it is rather painful to look at as the continuous dumping of dead animals, plastic bottles, Styrofoam boxes, scandal bags, old fridges, sanitary napkins, and other forms of waste have resulted in an unbearable stench. We have taken it up on ourselves to clean the area of the garbage, but it’s getting more and more frustrating as people are still using the area as a dumping site,” Dyke added.

He is calling on the authorities to assist with the process of ridding the area of garbage and to have the tunnel property become an official heritage site, which could attract tourists and other visitors to the parish as a place of attraction.

Before the collapse of the railway system in northeastern Jamaica, steam engines pulling several coaches with passengers and market produce could be frequently seen going through the tunnel at White Rock en route to Annotto Bay, St Mary, and beyond.

The once heavily utilised tunnel is now home to bats, whose droppings are used as manure by local farmers. The highly sought-after droppings are sold for roughly $5,000 per 50lb bag to mainly farmers and florists.

Following the collapse of the passenger railway system in 1980, it had a brief revival in 2011, only to be closed again in August 2012. However, private freight transport continues on limited tracks leading to the various docks around the island, transporting bauxite and sugar cane for export.