Silvera calls for more order in heart of MoBay 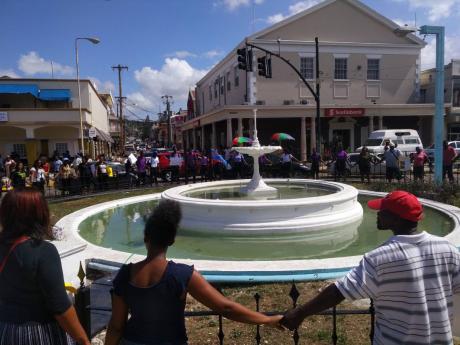 File
In this 2017 photo, citizens of St James create a human chain around the iconic water fountain in Sam Sharpe Square in solidarity to families who have lost loved ones to crime.

Montego Bay Chamber of Commerce and Industry (MBCCI) President Janet Silvera is calling for the stricter enforcement of law and order in downtown Montego Bay, particularly with taxi operators, as part of the effort to reduce indiscipline in and around Sam Sharpe Square.

“What downtown Montego Bay needs is order and enforcement. The municipal corporation and the municipal police will need to get to the stage where they understand that this is a city, and in order for the city to do well, it needs order,” said Silvera, following Wednesday’s official opening of the MBCCI’s new office in Fairview, Montego Bay.

“There needs to be more order as it relates to where the taxis are being parked. For instance, you find those taxi operators are parked around the square in the roundabout area. How that can be possible?” asked Silvera. “Something needs to happen where persons are given places to park and where persons can get taxis to go home.”

At the same time, Silvera dismissed the suggestion that the relocation of businesses to outskirts areas like Fairview would cause the downtown district to lose productivity.

“I consider the move to the Fairview, Rose Hall, and Ironshore areas to be growth. I do not feel that the growth to these areas will necessarily mean that downtown Montego Bay will become stagnant because you find that there are so many more businesses that are moving in where those others are moving out,” said Silvera.

“The people downtown need to know that this is our city and that we need to treat it well and take pride in the city itself. The town needs a proper plan, and the plan is out there. It is just to implement that plan and ensure that there is order in the city,” added Silvera.

The need for the development of the downtown section of Montego Bay has been a long-standing concern dating back to the 1960s when numerous informal settlements were created by job seekers looking for employment in the emerging local tourism sector.

In 2006, St James North Western Member of Parliament Dr Horace Chang, whose constituency includes 19 of the city’s 22 informal communities, said that the downtown area was crowded because there were no established social services within those communities.

Under the St James police’s new multiagency crime-fighting strategy, which was rolled out at the start of the year, crime management in downtown is high on the list of areas of concerns targeted for immediate attention. The overall strategy covers money laundering, drug smuggling, lottery scamming, stealing of water, electricity theft, illegal vending, and squatting.