Beckles expected to hold on to job despite pushback from Jamaica 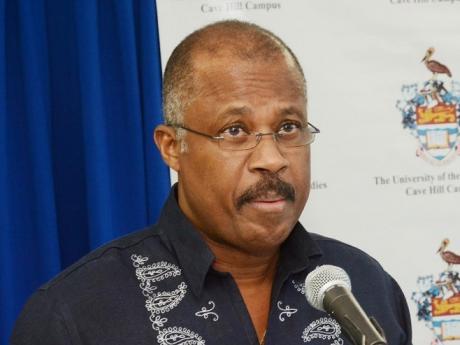 The decision on whether to renew the historian's contract for another five years has come down to the wire, as, based on university regulations and the seniority of the post, a determination should have been taken with one year to go.

Professor Sir Hilary Beckles is set to be returned today as vice-chancellor of The University of the West Indies (UWI) despite “strong” opposition from the Jamaican Government, The Gleaner has learnt.

A fight is also expected from the Trinidadian government, which is pushing for Professor Brian Copeland to be given a post-retirement contract to continue as principal of the St Augustine Campus in the twin-island republic.

Final approvals are expected at today's highly anticipated meeting of the University Council, the highest decision-making body of the struggling 73-year-old regional institution.

The meeting comes amid a fierce, racially tinged debate throughout the region over whether Beckles, 65, should continue as the executive head of the UWI.

The decision on whether to renew the historian's contract for another five years has come down to the wire, as, based on university regulations and the seniority of the post, a determination should have been taken with one year to go.

More than 140 academics, mainly from universities in North America and the United Kingdom, signed a petition to the council supporting Beckles amid claims that the chancellor, Robert Bermudez, wanted him out.

The chancellor, The UWI's ceremonial head who presides over University Council meetings, has not addressed the allegations.

Critics claim a 2020 governance report commissioned by Bermudez and which lamented, among other things, unchecked power wielded by UWI executives and hovering financial ruin were being used against Beckles.

Jamaica, sources say, has seized on some of those concerns in refusing to back Beckles for another term.

“Jamaica feels there's been too much extravagance at the university and fixing the financial situation needs new vision,” said a government official who did not want to be named because they were not authorised to speak on the issue.

Jamaica's concerns were reportedly clear from as early as January and a subsequent guessing game ensued over whom the Andrew Holness administration prefers for the top job.

However, if the issue goes to a vote at the virtual council meeting, Beckles is expected to survive, as he reportedly has support from a majority of the 17 contributing countries.

The Gleaner has sought a response from Jamaica's Education Minister Fayval Williams, who is to head the country's delegation at today's meeting.

A major fight is also expected at the meeting as Trinidad is reportedly insisting that Copeland be allowed to continue as principal at St Augustine after his formal retirement in July.

The university's leadership has reportedly pushed back, arguing that in light of the financial problems facing the institution which have been exacerbated by COVID-19, it was curtailing all post-retirement contracts.

Officials of the Dr Keith Rowley administration have reportedly said they will not back down.

The council meeting is scheduled to start at 9 a.m (Jamaica time).