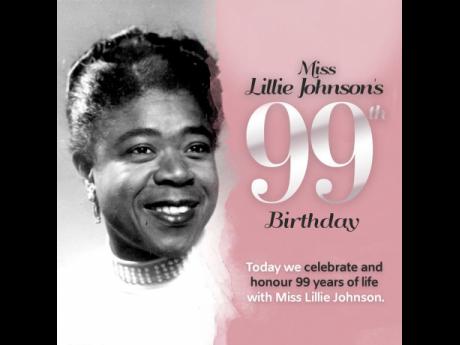 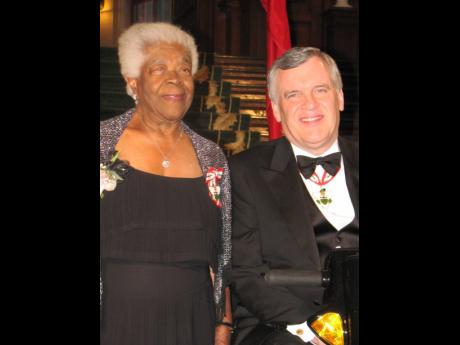 Contributed
Lillie Johnson with the 28th Lieutenant Governor of Ontario, David Onley, after she was invested with the Order of Ontario in 2011.
1
2

TORONTO: Lillie Johnson, founder of the Sickle Cell Association of Ontario, celebrated her 99th birthday in March and is still as strongly committed to education about sickle cell disease as she was at the inception of the organisation.

“My life since I came to Toronto has been a very happy one, except for a few things that came along the way,” Johnson recalled at a virtual celebration of her birthday.

“I have not regretted one minute of these things,” she says about her advocacy for sickle cell education and starting the SCAO in 1981. In 2011, she was invested into the Order of Ontario, the province’s highest honour, for her work with the organisation.

Johnson was born on March 16, 1922 in St Ann, Jamaica and, after completing her education at Wolmer’s High School for Girls and at Shortwood Teachers’ College, she worked as a teacher in Jamaica.

She left to study nursing in England in December 1950, arriving in January 1951, and travelled to Edinburgh, Scotland to start her training.

After completing her studies in Britain, Johnson returned to Jamaica where she worked at the University College of the West Indies Hospital in Kingston. From there, she went to New Jersey in the United States in 1958 and worked at the Beth Israel Hospital in Newark.

Johnson travelled by train from New York, where she visited family, to Canada, in August 1960.

Diana Burke, president PACE Canada, says Johnson has been a member of the registered charitable foundation since 1992.

She describes her as a very active member in its education and fundraising initiatives, also serving as a member of the PACE Board from 2002 to 2006 as chair of the education committee.

In this role, Johnson participated in conferences held to support National Child Day, including running focus groups on parenting, which she believed was essential for parents of the 3-6 year old children the organisation supported.

PACE Canada’s annual fundraising and member events, including the Strawberry Social and the Adopt-A-School Brunch.

“Lillie knew the value of the Adopt-A-School programme, which supports over 300 kindergarten schools in Jamaica annually, as she also supported the Cornwall Mountain Basic School in Westmoreland.”

“In recognition of her outstanding contributions to PACE Canada, including our mission to enhance early childhood care, development and education, and for her lifetime of giving as a volunteer through PACE and other community organisations, Lillie was honoured as a Life Member of PACE Canada and is still one today, though not as active. She did recognise PACE’s role in her life, as (noted) in her recent autobiography,” says Burke.

Johnson has been a member of the Jamaican Canadian Association (JCA) since its inception in 1962. She was also active on the women’s committee and was a generous supporter of the organisation.

“She is a pioneer and a trailblazer in every respect. Our community owes her a debt of gratitude; in fact, many of us owe her our lives,” says Audrey Campbell, a former president of the JCA.

She notes that, after witnessing the devastating effects of the genetic disease, sickle cell, on the black community, Johnson founded the SCAO.

“Her legacy within our community must be honoured,” says Campbell.

Karen Flynn, an associate professor in the Department of Gender and Women’s Studies and the Department of African-American Studies Program at the University of Illinois, Urbana-Champaign, is the author of Moving Beyond Borders: A History of Black Canadian and Caribbean Women in the Diaspora, which features Johnson on the cover.

“To fully grasp Lillie’s contribution to Canadian society means thinking about sickle cell disease (SCD) in the 1970s, when, unfortunately, so very little was known about the disease. It was during this period that Lillie recognised how little knowledge the public and healthcare professionals had about SCD and its genetic and hereditary configuration,” says Dr Flynn.

That babies weren’t being tested for the SCD. This had serious implications for infants, including death, says Flynn, and it is these factors, in conjunction with Johnson’s encounter with sickle cell patients, that led to the birth of the SCAO.

She says Johnson’s contribution to Canada is that her over three decades of activism eventually led to Ontario’s Ministry of Health and Long-Term Care including sickle cell disease on the list of 28 genetic diseases for newborn screening.

“This is an incredible and noteworthy accomplishment. What is striking (and a lesson we can all learn from) is Lillie’s persistence and commitment to ensuring that government and policymakers listened and responded accordingly.”

For decades, Johnson and the SCAO went to Queen’s Park to lobby the government until they were successful in 2005. They did not get discouraged, they continued to voice their demands. Imagine the lives that would be lost had it not been for Lillie and the SCAO,” says Flynn.

Prior to Johnson entering a long-term care facility, Flynn would call her and they would talk about a variety of subjects.

“In the majority of our conversations, invariably, we would return to the subject of sickle cell, Lillie wants nursing schools and nurses to be aware of sickle cell and to become advocates. Her goal is for newborn screening to be universal across Canada and not necessarily limited to Ontario. Lillie still maintains an advocacy spirit that is still present despite being 99. She is truly inspiring,” says Flynn.

In March 2015, one day before her 93rd birthday, Johnson launched her memoir, My Dream, part of the Canada 150 Memoirs Project.