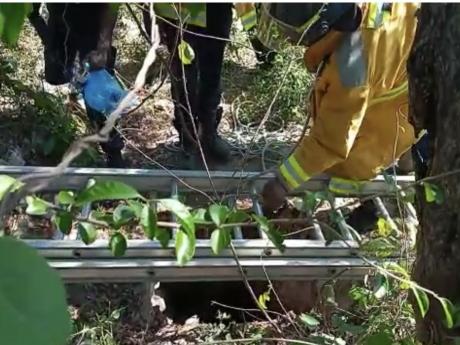 Acting senior superintendent of the St Catherine Fire Department Dennis Lyons said 17 firefighters and other emergency personnel were deployed to the scene to conduct an extraction operation.

A man who was abducted on Thursday and his car stolen was this morning rescued from a 55-feet pit in the community of Jones Avenue in Spanish Town, St Catherine.

It is reported that he was held up by gunmen who stole his motor car and took him to the community and threw him into the pit.

According to a police source, cops were alerted to the area today and on their approach, a man who was seen guarding the pit ran and escaped into the community.

Acting senior superintendent of the St Catherine Fire Department Dennis Lyons said that the department received a call about the incident around 7:14 a.m.

He said 17 firefighters and other emergency personnel were deployed to the scene to conduct an extraction operation.

"One firefighter was lowered into the pit and tied the rope around the gentleman and in a very delicate process we were able to remove him from the pit," Lyons disclosed.

The man was transported to the Spanish Town Hospital where he is under observation.