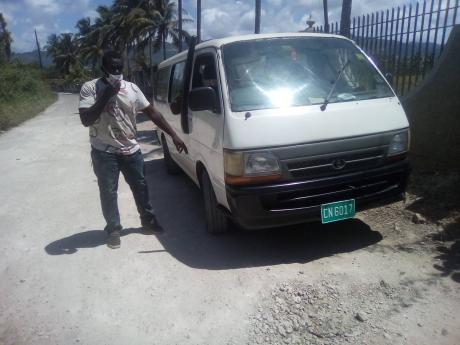 Rasbert Turner
An irate Kamal Byrd points to his vehicle which he claims was damaged as a result of the poor conditions of the roads. 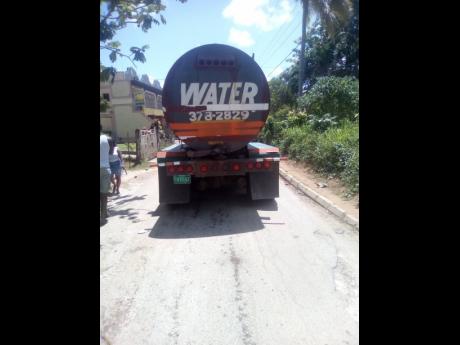 Rasbert Turner
One of the trucks that carries water to residents in the Jericho community.
1
2

Thirty-eight-year-old vendor Kamal Byrd said that he has lived all his life in Jericho district, St Catherine, but in recent times he’s finding it difficult to survive, and thrive, due to bad road conditions in the area.

A recent visit by The Gleaner revealed that roads leading to the rural community is indeed hard to traverse, as it is riddled with potholes.

"Is $80,000 I just spent on the front end of my vehicle, as the bad roads condition just tear it off and l keep losing money, because of the road. It must be fixed now!" Byrd demanded.

To make a living, Byrd buys fruits and vegetables from persons in his community and sells them in markets in Linstead, St Ann and Kingston.

He is one of several persons who revealed that the deplorable road condition is adversely affecting lives in the North West St Catherine community.

"I have been using the road from 2014. It never looked better than what you seeing now. I have to be fixing rack end, ball joints and other front-end parts weekly, plus other expenses. The whole road problem just eats away the little that you earn," Melbourne Tomlin complained.

His views reflected that of other residents, who are calling for better roads.

When The Gleaner contacted the member of parliament for the area, Hugh Graham, he acknowledged that the roads are indeed in a deplorable condition.

"I received $8 million from the Government for road repairs, and a half of that was spent on road repairs (patching) in Jericho and the rest spent in Victoria. I feel the residents’ concern, but more money is needed," he said.

Graham added that roads in the adjacent community of Waterloo are slated to be repaired following discussions with Everal Warmington, minister without portfolio.

"We are now waiting for work estimated at $28 million to be undertaken in Waterloo, so work is being done on the roads, just not enough," Graham said.

He added that roads in Lluidas Vale and other sections of his constituency are also riddled with potholes, and it is his hope that they will get attention in the recently announced programme, where 200 roads will be repaired.

Residents added that the problem is compounded by the lack of regular water supply to their community.

"There is the problem of road, and also the lack of water. We are left at the mercy of truck operators to supply our households with water,” said long-time resident Michelle Edmondson.

Residents in the area, which has numerous small farmers of fruit crops, such as oranges, apples and tangerines, are waiting desperately to see a change in their living situation.

In the meantime, Graham has informed that the Jericho water system is being upgraded to supply Charlton, Orangefield, Polly Ground and other communities with the precious commodity.