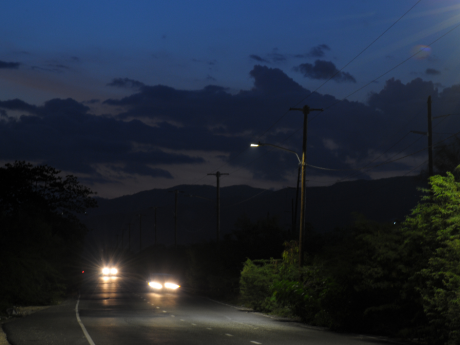 A section of Chesterfield Road in St Andrew where streetlights and electrical wires have been stolen – Contributed photo.

The Jamaica Public Service Company (JPS) is reporting that some 525 streetlights have been stolen across Jamaica since the start of the year.

The company noted that even the newly constructed Chesterfield Drive extension road in St Andrew, which was built as an alternative route to bypass Three Miles and a section of Spanish Town Road during recent road improvement works, has had a significant number of its streetlights and electrical wires stripped by thieves.

JPS says it has reached the milestone of having approximately 80% of Jamaica's streetlights being smart LEDs.

As the company continues with these upgrades and with repairing defective lights, it says thieves are reducing the benefits customers should experience.

“Well lit public areas are important for us as a society. The increased public lighting helps with matters of security, vehicular and pedestrian transportation, and nightlife activities, when we are again able. Streetlight theft affects not just JPS but our customers and we encourage persons to report to JPS and or the police any known perpetrators,” stated Blaine Jarrett, JPS' Senior Vice President, Energy Delivery.

Meanwhile, the JPS is warning the public to beware of persons carrying out streetlight repair scams.

The company says no money should be given to persons promising to fix defective streetlights.

At no time will JPS be asking individuals to collect money on their behalf.

The light and power company says this scam has been detected in Plantation Village, St Ann and that it is carrying out investigations.