Jamaica has access to US$1.1 million from Green Climate Fund 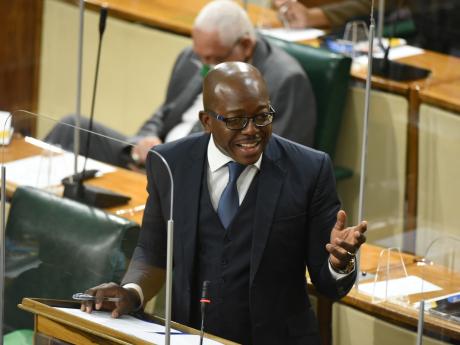 Minister of Housing, Urban Renewal, Environment and Climate Change, Pearnel Charles Jr., speaking during the 2021/22 Sectoral Debate in the House of Representatives on May 4, 2021 - Contributed photo.

Jamaica has access to a US$1.1-million grant from the Green Climate Fund to begin preparation of the country's first National Adaptation Plan for the current financial year.

This announcement was made by the Minister of Housing, Urban Renewal, Environment and Climate Change, Pearnel Charles Jr., during his 2021/22 Sectoral Debate presentation in the House of Representatives on Tuesday.

“The National Adaptation Plan will include a private-sector-engagement strategy, a finance strategy, and an investment plan for adaptation,” Charles Jr. said and emphasised that Jamaica has an opportunity to reduce the impacts of climate change for citizens to realise a better quality of life.

The National Adaptation Plan aims at integrating climate-change initiatives into different departments and agencies of government.

Charles Jr. also said that a pilot of the Local Climate Adaptive Living Facility (LoCAL) project will be tested.

The preparations for this pilot began in the 2020/21 financial year and will be advanced during the current fiscal year.

Charles Jr.said that at least four selected municipal corporations will benefit from capacity-building and financing opportunities, such as performance-based grants, over two fiscal cycles.

“What is clear is that more is being done as it relates to climate change. And we are going to work assiduously to ensure Jamaica is in tune with all the work being done by our climate-change division,” the minister said.

“Climate change threatens the very economic base on which we seek to build our country. Cognisant of this, my Ministry is moving to advance progress in building the country's resilience to climate change,” he added.