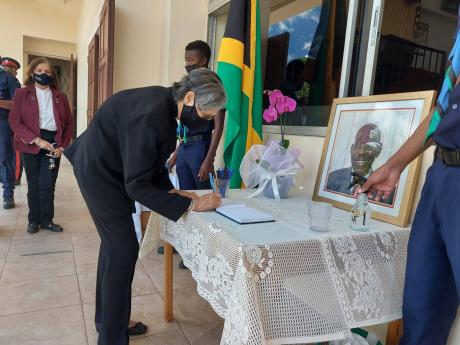 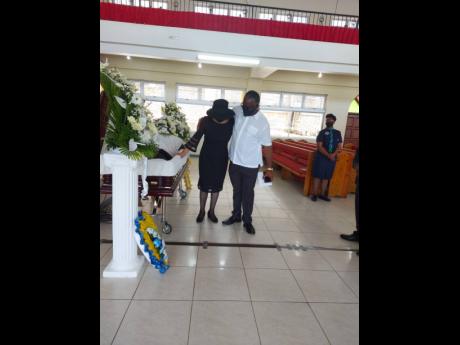 Tamara Bailey
Custos of Mandeville Garfield Green consoles the widow of the late Dr Gilbert Allen at the viewing ceremony at the Mandeville Seventh-day Adventist Church on Tuesday.
1
2

In a sombre viewing ceremony, members of the public were given an opportunity to bid their final farewell to former custos of Mandeville, the late Dr Gilbert Allen, at the Mandeville Seventh-day Adventist Church on Tuesday.

Allen, who served the parish as custos for 17 years while offering service as a medical doctor, died on April 15 at the age of 92, after ailing for several years.

With COVID-19 protocols prohibiting all funeral services, Allen’s body was only viewed on Tuesday and will be interred in a private ceremony today.

It is expected that there will be a funeral procession from the funeral home along the route of the Consolidated Health Services, which Allen owned and operated for years.

The justices of the peace from Manchester are also expected to stand guard along the route, to pay their final respects.

Praised by civic society as an outstanding public servant, a member of the Lay Magistrates Association, Calvin Lyn, said Allen’s contribution to the nation will not be easily forgotten.

“I knew him for over three decades, and one thing I admired about him was that he was never afraid to tell you of his humble background. He was an average Jamaican child who, along with his brother, became two of the best medical practitioners in the world.”

Lyn said under normal circumstances there would have been a week designated to celebrate the life of the community stalwart.