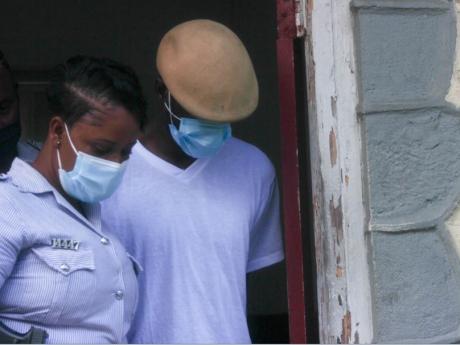 Anthony Bailey leaving the Trelawny Parish Court alongside a policewoman on May 3, 2021.

The matter was heard today in the Trelawny Parish Court at Clark's Town.

In applying for bail, Bailey's lawyer Khadine Coleman argued that the father of six is not a flight risk and that he is prepared to abide by any conditions laid down by the court.

However, in rejecting the bail application, presiding parish judge Paula Archer Hall pointed out that Bailey has been before the courts before and reports out of his community suggest that he is very aggressive.

“He has a previous conviction though not of a similar nature.

“In the district, he is known to be an aggressive person. On the day of the incident, because of what he is known for, nobody went to help the complainant. A medical report from Percy Junor Hospital is still outstanding."

Bailey was remanded until May 21.

Reports are that on April 15, Bailey, who allegedly had a long history of beating Ralston, with whom he had a tumultuous 16-month relationship, attacked her with a sharp knife and inflicted multiple slashes and stab wounds.

He was reportedly angry because she wanted to end the relationship.

Following the attack, Ralston, who escaped alive because Bailey thought she was dead and fled the scene, described her ordeal as a near-death experience.

She said despite being somewhat scared of her ex-lover, she is determined to ensure that he faces the law.

After the incident, Bailey remained on the run until April 26 when he surrendered to the police.

Following a question and answer session, he was charged with attempted murder.