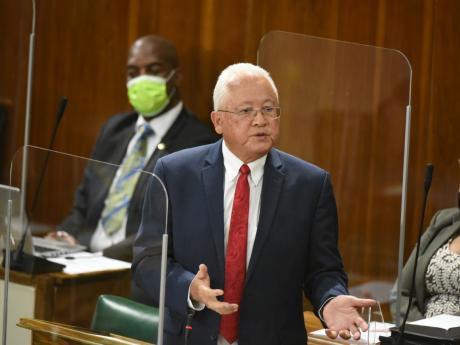 Minister of Justice, Delroy Chuck, making his contribution to the 2021/22 Sectoral Debate in the House of Representatives on May 4, 2021 – Contributed photo

Minister of Justice, Delroy Chuck, wants to see the expungement of the criminal records of more ex-offenders who have long given up on a life of crime and are now upstanding citizens.

Expungement involves the formal removal of a conviction from an individual's criminal/police record after a specific period of time has elapsed and after certain requirements have been met.

Chuck lamented that many applications for expungement are turned down because they do not meet the requirements under the existing legislation.

He, therefore, noted that his intention is to bring to Parliament an amendment to the existing law that will allow additional conditions under which expungement can be approved.

“There are so many cases which cry out for expungement, but because they are in the Third Schedule of the Act, they cannot be expunged,” he said while making his contribution to the 2021/22 Sectoral Debate in the House of Representatives on Tuesday.

Expungement is guided in Jamaica by the Criminal Records (Rehabilitation of Offenders) Act of 1988.

The principle underlying this provision is that a person who has made a sincere and successful attempt to be law-abiding should be given the opportunity to start afresh without being haunted by his/her unfortunate past.

Chuck pointed out that while the crimes were serious at the time they were committed and persons were given long sentences of 10 years and more, “they have returned to their community, they have lived a fairly upright life for 15, 20 and more years and now they would like their sentence to be expunged”.

“If they have served their time, paid their dues and after 10 years or 15 or 20 years, I think the opportunity should be given to them for their sentence to be expunged,” he stressed.

He noted that he will be taking the matter to Cabinet shortly, then Parliament “for us to examine it, because yes, we must be careful; yes, we must make sure that when we expunge a record that that individual has demonstrated that they have given up on crime and that they will continue to lead a decent life.”

Persons who would like their records to be expunged may make an application through the Ministry of Justice, to be reviewed by the Criminal Records (Rehabilitation of Offenders) Board.

To qualify for expungement, the offence in question must be one that attracts a non-custodial sentence or sentence of imprisonment not exceeding five years.

The person in question must also not have had any other convictions during a specified period of time referred to as the 'Rehabilitation Period'.

Offences such as the import and export of narcotics, e.g. cocaine and marijuana; murder, rape, and some offences under the Malicious Destruction of Property Act, such as arson, cannot be expunged under the current law.