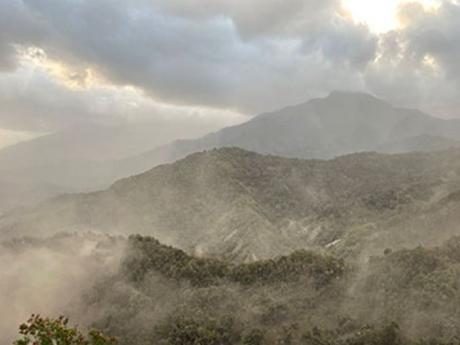 An Orange alert means that there is a highly elevated level of seismicity or fumarolic activity or both or other highly unusual symptoms.

KINGSTOWN, St Vincent, CMC – The Government has moved the alert at the La Soufrière volcano from Red, the highest, to Orange, the third-highest on the four-level scale.

Prime Minister Ralph Gonsalves said on the state-owned NBC Radio on Thursday that the Cabinet made the decision a day earlier.

The alert level was raised to Red on April 8 when the evacuation order was given, about 15 hours before La Soufrière erupted explosively.

A Red alert means that an eruption is in progress or may occur without further warning.

The last explosion at the volcano was on April 22, and La Soufrière has remained quiet since then.

An Orange alert means that there is a highly elevated level of seismicity or fumarolic activity or both or other highly unusual symptoms.

At this level, eruptions could occur within less than 24 hours' notice.

Gonsalves said that even with the alert level moving to Orange, “absolutely, you can't go into the Red Zone unless you have permission by the state authorities and all the Orange Zones people can go and return”.

The details of what is permitted will be published in an order, he said.

“But what we are saying, if you are in Chateaubelair, particularly the lower part of Chateaubelair, and in Fitz Hughes, that we do not want you to go back; and, therefore, we would prevent you from going back there…because we haven't finished the clean-up of all the ash that is there and it doesn't make sense you going back with all the ash on the streets and so forth,” he added.

Gonsalves said water and electricity services have been restored all the way to Richmond on the northwestern coast.

“Not because it is in Richmond you must go there. Absolutely not. But Fitz Hughes and Chateaubelair are in the Orange Zone – if you look at the map – and the clean-up, we are just in the early stages….So that's the story in relation to the alert and absolutely, you must not go into the Red Zone to go and live and do things like that.”

He said that the precise nature of what people would be allowed to do in the Red Zone would be indicated in the order.

“….But you are not to go there to live and stay. Not at all,” the prime minister emphasised.

“It's still very dangerous until the seismologists advise us and advise NEMO's [the National Emergency Management Organization's] director; and I am advised, accordingly, that the Red Zone is out of bounds, but the Orange Zone, you can go and reoccupy.”

Gonsalves said that mudflows north of the Rabacca Dry River have made the situation there more perilous than it had been a week earlier.

Meanwhile, speaking on the same programme, seismologist Roderick Stewart, who is head of the volcano monitoring team, said the volcano has remained quiet over the past 24 hours.

He said his team will continue investigating activities there.

“At the moment, there shouldn't be anyone in the Red Zone doing any recovery and that should be strongly policed,” Stewart said.

Stewart said he had heard there were quite a few people in Sandy Bay, a Red Zone community on the northeastern coast.

“And it just surprises me, because there shouldn't be anyone in Sandy Bay unless they are there on some sort of official government business, but there seems to be a small community there at the moment. I don't know if anything can be done about that at the moment. I'll leave that to the Prime Minister,” he said.