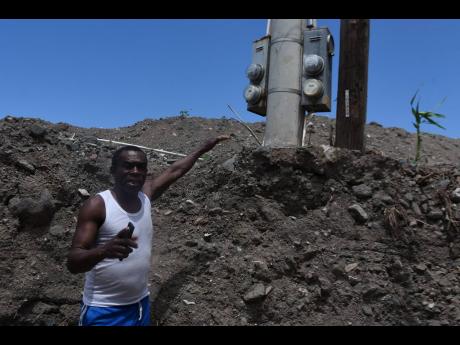 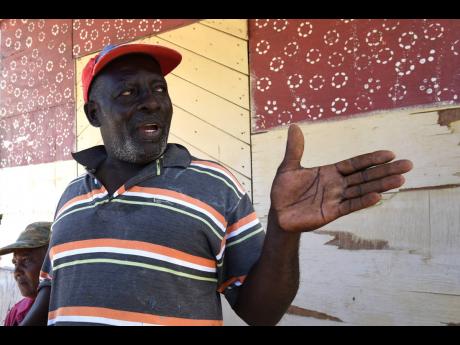 Kenyon Hemans/Photographer
Glenroy Thomas, a resident of Shooters Hill in Bull Bay area, reflects on the damage caused to his property by a landslide and floods last last year. He is hoping to complete a wall before the start of the hurricane season in June.
1
2

Residents of Weise Road in Bull Bay, St Andrew, say that despite several agencies and organisations collecting information from them after devastating floods when the Chalky River broke its banks last year, only the Jamaica Red Cross has helped in this new stage of rebuilding by donating food.

Bishop of the Mount Sinai Secret Heart Zion Church of God on Weise Road, Royestan Braham, told The Gleaner that it has cost some $1.5 million to replace benches, musical instruments, and other items destroyed in the floods. The majority of the money, he said, was contributed by him and members.

The bishop of 55 years, who also resides in the community, has had to make fixes to his home as well.

Keisha Johns, who owns a shop close by, said that when she was being told for the second time within 24 hours that her shop was being flooded, she had already given up, considering her goods were already damaged.

“Mi haffi buss out the wall in ya suh fi let out the water,” said Johns, who shared that at least $80,000 worth of items was lost.

Johns, who has been operating the shop for 12 years, said she has since raised her items and replaced her refrigerator, but the recovery of the community seems very slow as it seems to have been abandoned.

Some residents said that last year’s floods, which left the community under several feet of water, were the worst it had experienced, with silt burying walls and cars and destroying houses.

Patricia Plummer, who has been living in the community for 44 years, said her daughter started building a second floor on her house a couple of years ago, but she is now mulling over finishing it.

“I don’t know if she a go finish it or what ‘cause true she scared of the situation,” Plummer said.

With the Atlantic hurricane season, which runs from June 1 to November 30, only weeks away, Plummer and other residents “will watch and see” what will happen.

Like those at Weise Road, residents of Shooter’s Hill said no official work has been done in the community since the devastation late last year.

Glenroy Thomas, who survived a landslide and flooding, said he has hired tractors to clear debris from the side of his house in preparation for building a wall.

“Mi nuh really have the funds yet fi do everything,” he said, mentioning that he would have liked to have had the wall completed before the start of the hurricane season.

Thomas is also worried about a pile of dirt on the hill above his house since the landslide that happened last October.

Communications manager at the National Works Agency, Stephen Shaw, said the mission was to clean and clear to “allow water to flow to the sea, and, where possible, recreate embankment.

“Because the channel was heavily silted, we sought to remove the silt and create a channel,” he said.

Shaw explained that the ideal long-term solution is river training. However, “the Government has not provided any funds for that to be done,” told The Gleaner.

Requests for comment from St Andrew East Rural Member of Parliament Juliet Holness, in whose constituency both communities fall, were not honoured up to press time.