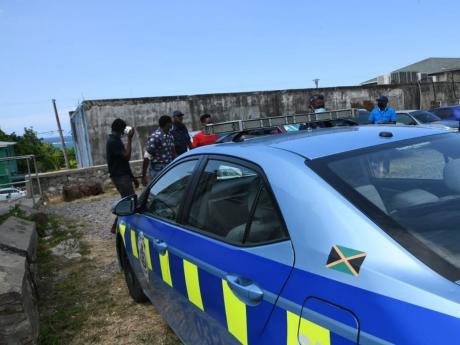 Police personnel escorting three of the five accused in the St Ann buggery case involving a 13-year-old girl following their appearance before the St Ann Parish Court on May 7, 2021 - Rudolph Brown photo

The five persons charged in connection with the case of buggery involving a 13-year-old girl were remanded when they appeared in the St Ann Parish Court today.

The matter was set to be heard this morning but could not proceed.

The case was subsequently rescheduled to next week Friday and the accused remanded.

The accused, who are two 16-year-old boys and a 23, 20 and 18-year-old men, are charged with abduction, buggery, and grievous sexual assault.

A lawyer representing two of the accused told The Gleaner that bail applications are expected to be heard at the next court appearance.

The police had reported that she when to stay with her grandmother while her mother went to work.

While making her way to a shop she was accosted and dragged into an unfinished building where she was buggered.

The incident was reported to the police days later and the suspects were subsequently picked up.