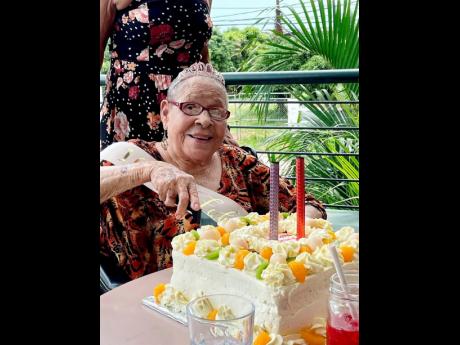 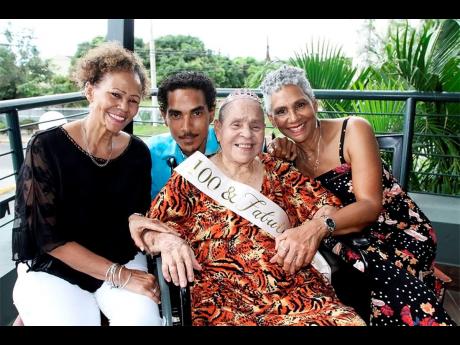 ALTHOUGH COVID-19 pandemic has restricted large social events for many people, that did not prevent Maysie Culliton-Moore and members of her family from celebrating her 100th birthday in supervised but still loving style last Saturday.

Culliton-Moore, a retired nurse who now lives in Kingston, said she was grateful to be able to highlight her incredible milestone, which she celebrated with a socially distanced restaurant meal that she shared with 10 of her relatives in an open-air setting.

“I feel good about being 100 years old because when I was younger I was very ill over a period of time and I did not think I would live, much less to reach 100. I have been blessed to have people taking such good care of me,” Culliton-Moore told The Gleaner.

The senior citizen was born on May 1, 1921 in Salt Gut (now known as Boscobel), St Mary, one of nine children for parents Ernest and Daisy Culliton. A graduate of the Boscobel Primary School, she later did nursing training at the Kingston Public Hospital, sparking a lifetime of service both as a private nurse and working in the public health sector.

In 1951, she married her husband, Hugh Edison Moore, with whom she had three daughters and spent 69 years in wedded bliss until his passing in May 2020. She juggled life as a wife and mother with her nursing work, which took her to several facilities across the island, including her last stop at the Retreat Health Centre in St Mary, where she worked until her retirement in 1981.

Looking back on her life, Culliton-Moore described the nursing profession of her younger years as one filled with compassion. This, she said, is in stark contrast to what she has observed among Jamaica’s people today.

“In my day, I believe the nurses were properly trained, in that they were more compassionate and they treated patients with respect. Nowadays, I think they are not being trained that way,” said Culliton-Moore. “The people in my younger days were a lot more caring because we had gone through World War Two when things were scarce, and if somebody had something that somebody else did not have, they were willing to share. But now people are very selfish and they fight over everything.”

Daughter Caleen Cockburn recounted how her mother, who raised her family in the Anglican faith, was always optimistic and full of encouragement for others.

“Mummy was always very positive. If you had a little problem and you told it to her, she would say ‘Don’t worry about that,’ and she would tell you all the positive things that could come out of it,” said Cockburn.

Culliton-Moore had a word of wisdom to share with today’s generation of Jamaican youth.

“Today’s generation must put God first in their lives and practise to love each other. If we love each other, it would be a better situation where we would not have so much violence,” said Culliton-Moore.