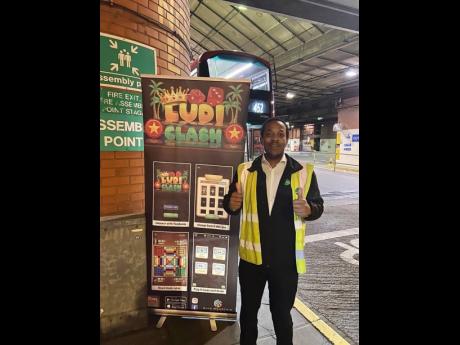 The popular board game Ludo, a staple in many Caribbean communities, got a viral boost recently when a Willesden man successfully launched an app on both Google Play and the Apple App stores that allows users to play from any hand-held device.

Thirty-five-year-old Otis Nelson, a London bus driver of Jamaican heritage, was initially furloughed in March 2020, following lockdowns across the city because of the COVID-19 pandemic. With extra time on his hands, he decided to follow up on an entrepreneurial dream.

“I came up with an idea to put the Jamaican version of Ludo (Ludi) on an app when we went into lockdown March 2020. I began to do research on how app businesses become successful. Once I completed a business plan, I started to approach companies to see the cost around development and if I could get a start-up loan. Unfortunately, this was not successful, the cost involved was very steep. I was advised to look towards India where app developing is a big industry. In the end, I managed to get a cost that allowed me to fund my game independently,” he explained.

Ludi involves two to four players moving their markers at the roll of two dice. The aim is to avoid obstacles and arrive on home base.

DIFFERENT FROM OTHER LUDO

“The game we created is different from all other Ludo games available on the app store. This one has rules familiar with Jamaican rules such as road block, 6 roll again and two dice game play. We also have different board designs that can be changed to suit the players preference,” he explains.

The software developers based in Gujarat, India took on the project and worked with Nelson to develop Ludi Clash.

“It’s been almost a year and a very demanding process alongside my job but the developer and I finally got Ludi Clash published on both Google Play and the Apple App stores. I managed to get my logo trademarked and patent complete. We have been live since 24th February 2021 and currently have over a thousand downloads,” Nelson says.

Nelson, who grew up in London, spent some of his early years in Jamaica living with a grandparent, and attended Lowe River School in Mendez Town, Trelawny.

Recalling his Jamaican roots and influences, he says:

“All four of my grandparents are Jamaican nationals. My mother’s parents (Llewelyn and Esmina McKenzie) are from Trelawny, Mendez Town, and my father’s parents (Lesley Nelson and Icyline Nelson) are from St Thomas Epping Farm.

My grandmother Esmina McKenzie is the last surviving grandparent currently living in Harlesden. My stepfather (married to my mum since I was 2 years old) is from Kingston, Barbican, and I visit regularly.”

He has hopes of returning to help his rural community.

“I have always wanted to be involved in property-development projects in Jamaica. I would also like to be able to do good things in the area that I have family in. Things like improving facilities that benefit the youths and local community. I am hopeful that the popularity and revenue from Ludi Clash™ will help me to achieve this,” he noted in emailed responses to The Gleaner.