Radiation machine repaired after more than a month 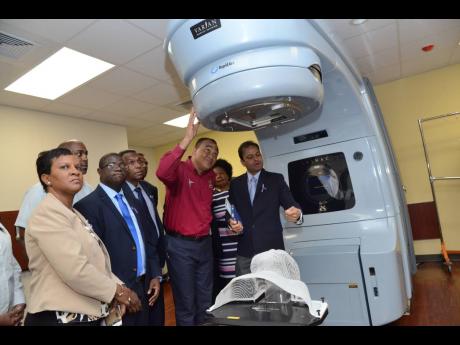 Hundreds of Jamaicans suffering from cancer at various stages were without radiation treatment for more than a month after the machines at St Joseph’s and Cornwall Regional hospitals (CRH) broke down in the last two months.

Treatment resumed last week after US-based technicians visited the island to carry out repairs. The machines are the only two available in the island’s public health service, while one other is available in the private sector at “costs less than one per cent of all Jamaicans can afford”, The Sunday Gleaner was told.

Additionally, private treatment is not readily available for individuals already receiving treatment through the public facilities, according to some patients who were left in limbo.

The University Hospital of the West Indies (UHWI), the island’s teaching hospital, was unable to help as is it without a machine. Plans to secure a similar one for the hospital was shelved for the purchase of a cancer diagnosis machine.

UHWI is said to be playing a “supportive role in the treatment programme, but individuals would access treatment through either the public or private sectors”.

“Two machines came – one to serve Kingston and its environs and the other for the rest of the island. The Kingston one was at St Joseph’s Hospital and the other was located at the CRH. I can’t speak to machines being down, but to the best of my knowledge, UHWI’s contribution was to provide support for the programme through diagnosis,” a health official told The Sunday Gleaner yesterday morning.

Located at the US$15-million (J$860-million) state-of-the-art National Cancer Treatment Centre, the machine provides cancer patients with access to treatment using a linear accelerator (LINAC) – a shift from cobalt radiation therapy – to increase the efficacy of cancer radiation treatment as well as access to such care in Jamaica. The LINAC machine was considered to be one of the most advanced in the world, Health Minister Dr Christopher Tufton said when the centre was opened in 2018.

At the commissioning, Tufton said that that cobalt machines were merely “making people feel good, but not saving as many lives as they should”.

He said the centre could be considered a case study in the modernisation of public health infrastructure in Jamaica, as it “demonstrates not only the possibilities in healthcare, but also the amount of work that has to be done to upgrade and expand infrastructure in the sector.” But since March, new referrals and existing patients were left in the lurch, uncertain of when their treatment would continue as they were fed a slew of excuses for the cessation of treatment. They ranged from the machines needing parts to the absence of suitably qualified personnel to carry out repairs locally, and that manufacturers did not send a repair team when expected.

South East Regional Health Authority Chairman Wentworth Charles told The Sunday Gleaner yesterday that at least one Jamaican was trained to do repair work, but the current problems experienced were outside of his knowledge.

“There is a service contract with the contractor, but we have just paid $16 million for repairs. The report is that the machine starts and stops again. Hopefully, the individuals who are still in the island can correct it. It is my understanding that there is only one supplier for the machine in the Western world,” he said.

Almost 100 patients are “usually at the hospital daily for treatment”, said one patient.

One doctor in the know told The Sunday Gleaner that the CRH offered to treat 11 priority patients for brain tumours, but with the hospital unable to admit them due to lack of bed space, they would have to be transported daily.

“Cancer is the second leading cause of death in Jamaica and we have three machines in the island – two in the government sector and one in the private sector – in a country that has allowed some people to become millionaires many times over and they give back nothing,” said the medical professional.

“I have seen doctors perform miracles, but there is so much they can do,” he said, adding, “Overwork killed the machines just like it is killing all of us.”

Now, there are fears that the interruption could disrupt the treatment programme, especially if the cancer is aggressive.

“Oh my! Oh my! If someone missed four weeks of a therapy, they need to continue the treatment when the machines start working again. They need to be sent back for scans to see if there was a progression during the time they missed the radiation,” said Nurse Alice Bennett.

According to her, some cancers are very aggressive and no matter the treatment, the prognosis is still the same. She said it was important to know the treatment regime offered and if it included radiation and chemotherapy.

“Radiation is where you used the high radioactive beams to burn the cancers, and chemotherapy is the systemic drug that is put through the veins to attack the cancer cells in the body,” she explained.

The Jamaica-born nurse explained that the machine administers different dosages for the various types of cancers at the different stages.

At the hospital she works, she said machines are typically not used on weekends.

Western Regional Health Authority boss Errol Greene could not be reached for comment on maintenance queries.

The Sunday Gleaner was also unable to get a response from Tufton.