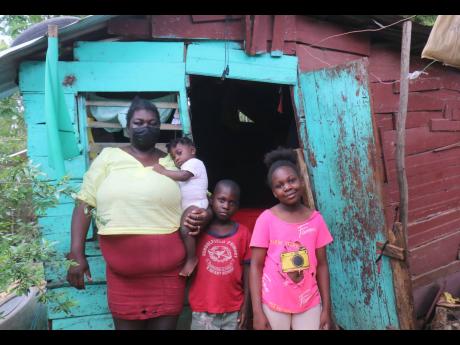 Ashley Anguin/Photographer
Topal Williams and three of her children stand outside their home in Schoolfield, St Elizabeth. 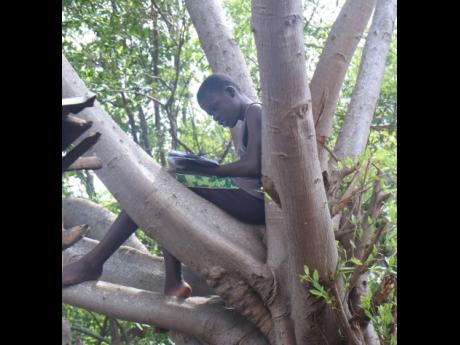 Ashley Anguin/Photographer
John-J Williams sitting on the tree, where he normally reads for school at his home in Schoolfield, St Elizabeth. 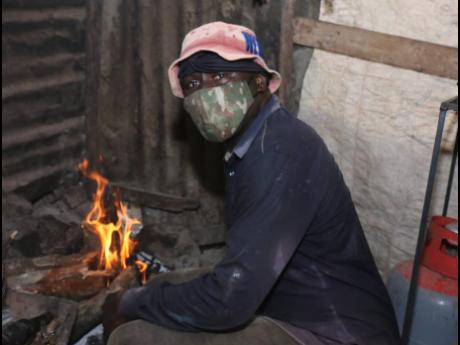 A narrow, stony path, which can be quite treacherous, leads to the brightly painted green one-bedroom hut that houses the Williams family of six.

There was a time seven of them slept in the small room, but the eldest has moved out to find life on his own.

Forty-seven-year-old Courtney Williams, his wife Topal and their four children could be described as poor, and the depiction would be correct, though, they boast, it would be hard to tell..

There in the Santa Cruz Mountains in St Elizabeth, cooking on wood fire embedded in stones, using a pit toilet and locking their doors at nights with a mini latch is the norm. Carrying drinking water from a mile away on the head is also a regular sight.

The natural ground with no flooring in the kitchen, which was gifted recently with a small stove, is where the Williams family cook their turmeric, served to their children as tea or used as curry for their meat.

“Though we are poor, people would not know it. My children are satisfied with what they have in life. Even if so-so food, they will never tell me dem want chicken. If you see these kids, you think is Matalon,” Mr Williams quipped, weeks before The Sunday Gleaner visited his humble home.

There are no locks on their doors. Instead, they use a chain, and Williams notes that his children are doing good in school, have been able to access online learning, but do without on the days they don’t have credit for Internet.

“It is challenging for six of us in the one room. All of the children on one bed, while my husband and I sleep on the other. The kitchen is covered with tarpaulin and zinc, and when it rains it blows inside,” Mrs Williams told the Sunday Gleaner team.

Her husband adds his voice to the conversation, stating that life for them is comfortable, but he is not satisfied, particularly when he thinks he could do with some more space for his children when they need to study.

John-J, the eldest child in the home, finds a tall tree with a makeshift seat to sit in while he studies from the books in hand. His sister, Three-G, the middle girl, makes the best with any of the large rocks that her home sits on.

It has been 18 years since the Williamses have lived on the rocky land, situated in the district of Schoolfield, St Elizabeth, “and me and my wife would probably stay here until we die, if not for the children”, said Mr Williams.

NOT LOOKING FOR HANDOUTS

The father of six is not looking for handouts. He does a bit of farming and sells some produce in the Santa Cruz market, as well as helps around in the community whenever his neighbours are constructing their homes.

The higglering, he says, helps once per week to find food because the money he makes from selling cannot help him to get to the other week.

“I trust (credit) from other small farmers; sell oranges, apple, jackfruit, and any other fruit in season,” he said.

He is quick to point out that he is neither crippled nor sick, so sees no reason why he shouldn’t work. He just needs help to do his own thing.

In the meantime, he refuses to allow stress to get the better of him.

Mr Williams admits that he doesn’t have enough money to move his family out of their current situation, but has family land that belong to his late grandmother a few steps from his home.

“If we were even to get help to build where we now live, it would be difficult to bring material up the hill, owing to the rocky terrain,” he explained.

He is proud of his one bedroom, praising its ability to withstand hurricanes, while others around have been ravaged by the winds and rains of the storms that have levelled homes throughout the country in the past.

“The trees that surround the house protect it,” he boasted.

Mrs Williams, in recent weeks, has been operating a small shop, sponsored by Kerene Nelson of the Kerene Nelson Signature Excellence Fund, who has literally adopted the family. The high-school teacher has also secured a water tank for the family, but wants to see them living in better condition.

Nelson recognised the family’s needs through her interactions with young John-J, who was a beneficiary of the excellence fund when she taught at Schoolfield Infant and Primary.

“I saw that they desperately needed a home and so I wrote to The Gleaner, asking them to highlight their situation,” Nelson noted, but she went even further by reaching out to sponsors near and far for funding towards the shop for Mrs Williams.

The Williams kids will probably continue to ask, “Daddy, when you going to build a new house?”

And as often as they say it, Courtney Williams says, “I feel bad, but I try to be happy, because mentally I remain strong.”