After years of trying and then giving up, Kerian Phillips gives birth to girl 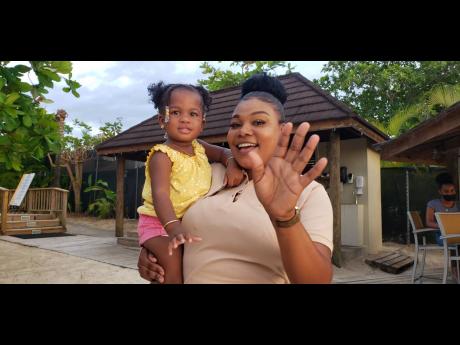 Photo by Kareem LaTouche
Kerian Phillips with her daughter, Khalia.

Constantly walking and serving others as a waitress, Kerian Phillips is described as a workaholic by her boss.

This work ethic has been ramped up over the past few months, as the first-time mother is now toiling for both herself and her child.

“I have always been a very active person where work is concerned. My supervisor really doesn’t have to do much. Once I see a guest looking like she needs assistance, I’m there to help,” stated the Hanover native.

With baby hair outlining her forehead and the rest of her hair neatly put in a bun, Kerry, as she is called, is always showcasing a pleasant smile. However, this was not the case five years ago, when she was trying to conceive.

“At 25, I was really worried because I wanted to have my first child by then. However, when I tried, nothing happened, so I went to the doctor to ask if everything was alright with me and he said yes,” she told The Sunday Gleaner.

Kerry made a few more attempts, but they were all futile.

“After a while, I gave up hope because nothing was happening and it was becoming a bit depressing. So I put my mind off the whole child thing,” she said.

As she focused all her energy on personal development and advancing in her profession, she started to experience something strange.

“A little over a year ago, I started getting these dreams where I saw this little girl. I didn’t know what to think of it, so I went to my mother-in-law and asked her if there were any deaths in the family. She said no, but the dream would not go away. It happened every night,” she recalled,

With a slight sense of hopefulness, Kerry took a pregnancy test; however, the result was inconclusive.

“When I looked at the stick, one of the lines was bold but the other one was pale. So I decided I would go to the doctor for something more concrete,” she said.

Kerry was quick to point out that she had no morning sickness and, as such, she was not trying to get overexcited about being pregnant.

“I went to the doctor and told him about what I saw on the stick. So he did his test and came back to me and said I was very much pregnant,” she recalled, with a big smile on her face.

“I was so happy, and now I started to worry if I was going to have a healthy baby. Everything was going good up to the last part, when I had to do an emergency C-section, but once that was finished, everything was smooth sailing.”

The proud mother now spends time working in the days and eagerly going home to nurse her 18-month-old daughter, Khalia, in the evenings.