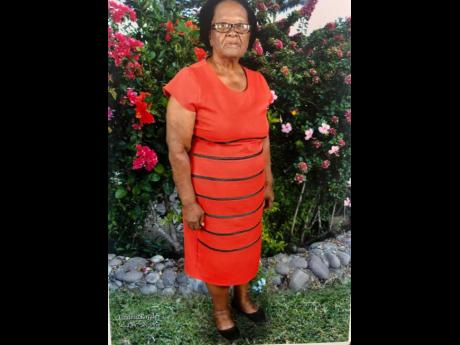 Seventy-eight year-old Myrtle Roye, affectionately called ‘Mother Roye’, has only given birth to two biological children, but she has nurtured many others.

The retired teacher, who is now a violence interrupter in Effortville, Clarendon, has mentored many children who she taught while a teacher at Cross Primary and Junior High School in the parish. In fact, at the time of this interview, some of her former students stopped by her house to wish her happy Teachers’ Day on Wednesday, May 5.

Besides her biological children, she has raised five children who are unrelated to her and three grandchildren. Her greatest joy of being a mother to these children is that they have turned out well and are contributing positively to society.

“At the time, there was a lot of violence in the community, and these children – all boys – were on the road, so I eventually took them in and assumed responsibility for them. I saw to it that they all went to school. After leaving school, some went to HEART to learn a skill. They are all now employed and are doing well,” she said proudly.

As for her biological children, both successfully completed university with one employed as an auditor. Her other child passed away, leaving behind three children who she now cares for.

“There are so many joys of being a mother, but when you see your children progress in life, for me that is one of the greatest accomplishments. I always encourage them to excel and to not fall below five in placement in their classes. When I saw that my children were doing well academically, I felt proud,” she said.

Roye, however, noted that it was not an easy task raising these children but emphasised that parents have to be strong and set good examples for their children to follow.

“You can’t be stealing and be telling your child not to steal. You have to set an example. You have to constantly pray for them and let them know that God should be an important part in their life,” she shared.

She has instilled good values in her children, with one of those values being satisfied with what they have and never watching what others have. She said that advice was passed on to her by her parents, who gave her tangible lessons of this value throughout her childhood.

The former vice -principal said that key to raising responsible children is developing a good rapport with them and making them feel comfortable to share information with you.

“As a family, you sit and discuss things with your children. Always include them in your decision making. You alone don’t make the decision,” she said.

As a violence interrupter, Roye applies her listening skills when doing her job in the community. She shows compassion, empathises, and then directs them on the right path.

“The young men who are in trouble, you can’t just write them off because when they see that someone cares and talks with them, you can redirect their lives,” she said, pointing out that many of them need employment to keep them occupied and away from a life of crime.

Her advice to other mothers is to spend time with their children and make sacrifices to ensure that they have a good education.

For Robert Grant, caretaker for Palmers Cross, Roye has had a positive impact on his life. “She has had a tremendous impact on my life. She is one of those persons I really look up to. She has been a mother, mentor, and adviser to me. Where I am now, I owe her a lot in terms of the guidance she provided to me,” he said.