Susanne not giving up Faith 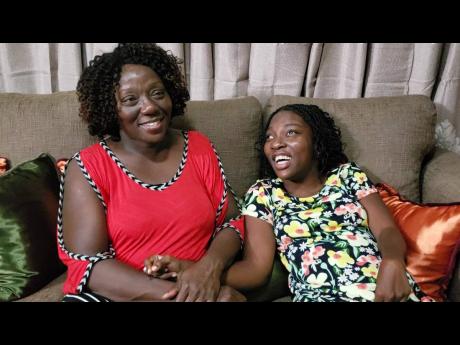 The first time I saw Susanne Henry, I was fascinated by her strength and fervor as she cared for her daughter, Faith, who has cerebral palsy. It is a group of disorders that affect a person's ability to move and maintain balance and posture. In this case, Faith is also unable to speak succinctly as well as write.

However, none of these has stopped her mother’s unwavering support as I watched her lift her 21-year-old daughter from a wheelchair then put her into a Noah van. “I am very grateful because this was much harder when I was driving a car. Firstly, it didn’t have the space to carry a wheelchair, and secondly, it would hurt my back to try and get Faith to fit in such a small space.”

The responsibility has been solely on Henry’s shoulders since Faith’s father passed away over six years ago. “It can get overwhelming at times, but God is good as I have always had someone who is willing to help.”

This was most evident when an apparatus was donated to her to help move Faith’s special wheelchair in and out of the vehicle. “I was so grateful for this because her wheelchair is specially equipped to move her around. So it has batteries at the bottom, which makes it very heavy,and there is a controller on one of the arms, which allows her to move about. It would be so hard for me to constantly lift it up and put it in the vehicle after lifting her out of it.”

Despite her daughter's disability, Henry wanted the best for Faith and when she got accepted to Ardenne, it was a moment of great joy. “I was really happy because this was a really good school, and from the moment we arrived, they treated Faith with open arms.”

What was most surprising for her was how the teachers did the best they could to accommodate Faith. “There are two teachers that really stand out, especially during her CSEC preparation - Mr Tomlinson and Mr Wadsworth, her art and physics teachers. I remember one of them lifting her up three flights of stairs to ensure she got to class.”

“There were also times when I was stuck at work and couldn’t move, and Mr Wadsworth would keep her in his physics class until I showed up.”

In the end, this dedication paid off as Faith passed five subjects at the Caribbean Secondary Education Certificate level. During her graduation ceremony, there was pandemonium when she was called to the stage. “Everybody stood up. It was such a heartwarming occasion. I couldn’t hear myself talk as her schoolmates were all screaming.”

With the requisite qualification, Henry started looking for a tertiary institution for Faith but had her concerns. “At one point I was saying, ‘Am I doing the right thing?’ because not everywhere is willing to do what it takes to accommodate her, and I don’t want to put her somewhere that makes her feel unwanted.”

After much thought and communication with her daughter, Henry decided to enroll Faith in the University of Technology, where she just finished her second year in pursuit of a degree in computer information systems. “Again, they have treated her so well, and she is loving the experience.”