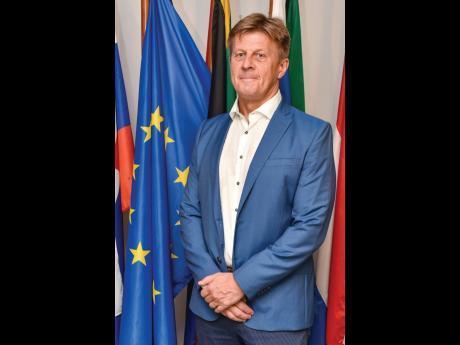 Head of the European Union (EU) Delegation to Jamaica, Marianne Van Steen, is encouraging Jamaica to increase trade in services to better exploit opportunities within the 27-member trade bloc.

“I am very disappointed; I think we should do better,” Van Steen told The Gleaner last week with regard to Jamaica’s free trade thrusts under the 2008 Economic Partnership Agreement (EPA).

The review report issued in 2020 showed that the partnership has not yielded the intended benefits.

A second five-year review is overdue.

Van Steen said that an assessment of Jamaica and the wider Caribbean makes the EU unhappy.

“We would have thought, we would have hoped, that the results would have been better, and we are trying to analyse why that is and what we can do,” she said, noting that most customs tariffs were gradually removed under the EPA.

The assessment was conducted prior to the implementation of Brexit, which means that the impact of the United Kingdom’s departure from the EU on Jamaica’s trade is yet to be comprehensively explored.

“We’ve been discussing it a little bit at our level, but we have not yet had sufficient data to study that. We don’t think that that is going to be the biggest problem,” she told The Gleaner.

Trade hurdles between Jamaica and the EU include the vulnerability to natural disasters, infrastructure limitations, and production capacity, which have all affected the banana, sugar cane, and bauxite industries.

The ambassador said that Jamaica tends to focus on the export of goods because those items are easily quantifiable, noting that the country was unable to produce sufficient surpluses for export.

Notwithstanding these challenges, the Caribbean is faced with various technical barriers to trade such as the required standards of goods.

The EU exported goods valued at €5.43 billion to Caribbean countries and imported €3.40 billion in 2020. Trade in both exports and imports declined in 2020 because of the coronavirus pandemic.

Fredrik Elfeldt, deputy ambassador of the European Union, said the trade of both goods and services was expected to increase with an impending partnership between the Jamaican Government and the EU,as the Holness administration has reportedly been keen on digitalisation.

Elfeldt is hopeful that this partnership, along with the European Union Chamber of Commerce in Jamaica, will remove barriers and increase Jamaica’s trade in services.

“We know that without a core infrastructure in digitalisation, services will never be profitable,” Elfeldt said.

The deputy ambassador listed auditing firms and business process outsourcing (BPO) companies as examples of the services that can be provided by Jamaica to EU member states.

“With new technology, it will be better in the future, and there is a lot of skilled labour in Jamaica,” he added.

Endorsing the ambassador’s support of the US, Canada, and the United Kingdom recruiting employees from Jamaica, Elfeldt explained that the migration of talent could offer a return on investment.

“Professionals that migrate to another country can come back with very valuable experience,” he remarked. “For that, you need, of course, to have a highly productive economy, and with the investment in digitisation that is coming, good ground will be laid.”