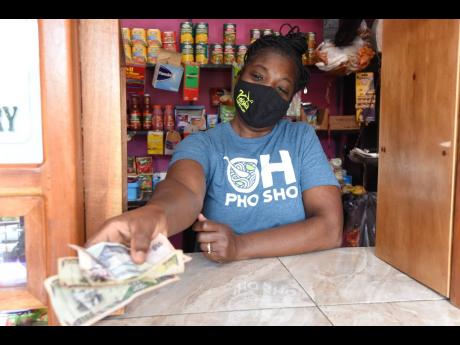 Ian Allen/Photographer
Michelle Swearing, shopkeeper at Top Road in Mavis Bank, hands change to a customer on the weekend. She says that transportation costs linked to the Gordon Town road breakaway have had to be passed on to customers. 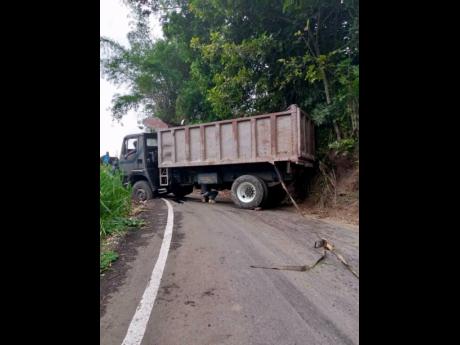 Contributed
The driver of this truck reportedly had problems negotiating the Savage Pen road on Thursday. The steep, winding alternative to the breakaway-hit Gordon Town main road has been viewed with trepidation by some commuters.
1
2

Almost six months after a major breakaway along the Gordon Town main road in St Andrew disrupted the traffic flow to a swathe of communities, residents continue to pay a high price from the ongoing inconvenience as repair works continue.

The alternative route via the rehabilitated Savage Pen road is a steep and winding thoroughfare option considered too dangerous for some to traverse. But the other choice, a three-hour grind through Silver Gap, is more than four times longer than the traditional path blocked by the breakaway.

For Michele Swearing, who runs a well-stocked mini mart at Top Road, the challenges presented have seen some delivery trucks discontinue service to the area, with a cost increase by the companies that still serve the rural communities.

“The road has affected us badly in that we have to travel longer distances, so it is much more costly, and even some of the delivery vehicles stop coming because they cannot manage the Savage Pen road,” she told The Gleaner on Saturday, days after a truck had overturned.

This has meant making more trips, using vehicles with smaller carrying capacity to get deliver the same of amount of goods, resulting in more trips and, ultimately, higher costs.

“The animal truck feed still comes, but I have to pay a little extra to bring the feed because the driver has to take the longer route,” Swearing told The Gleaner.

The businesswoman disclosed that while her customers have little choice in buying the cooking gas, despite the increased cost, she has noticed a fall-off in the amount and pace of sales of animal feed.

Having operated the mini mart for the past 15 years, this is the worst business has been, said Swearing.

She’s hoping for a return to normality but is convinced by a claim for a completion timeline, she attributed to Member of Parliament, Juliet Holness.

“According to the MP, she say by end of July into August, which seems to be maybe that is going to be a miracle because based on where it reach, I can’t see that being ready before end of year into next year,” said Swearing.

The breakaway repair bill is expected to remain at $187 million.