Mother of four looks to future despite years of setbacks 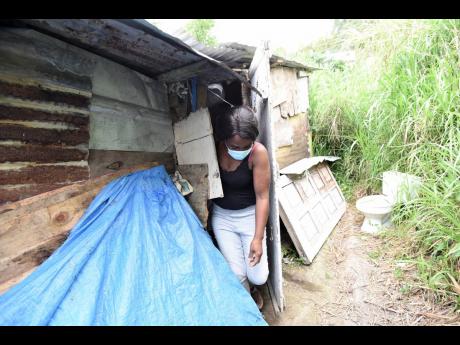 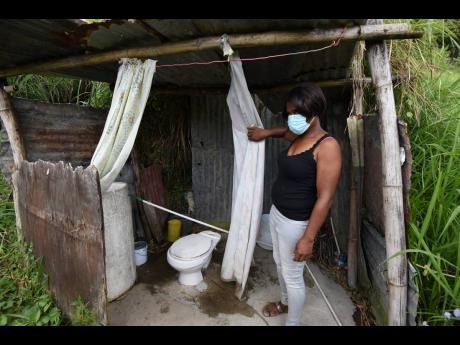 Life has dealt 50-year-old Janet McKenzie so many kicks in the gut that it would be natural for her to be bitter, but the mother of four remains upbeat about the future.

That optimism was on display outside her ramshackle home in rural Green Peas, Content Gap, in the constituency of St Andrew East Rural, on the eve of Mother’s Day.

Well off the beaten path, the building is divided into two segments: a very small room and a much smaller one.

Newspaper was used to seal cracks in the wall – and there was plenty of it. Other gaps in the building were left uncovered.

Outside, a makeshift coal stove sat silent, while nearby, the newest addition to the family, a puppy named Brownie, kept watch. A little distance off to the back stood a makeshift bathroom, offering very little privacy from prying eyes.

Things, however, weren’t always like this when her husband was working. But life took an unexpected turn for the worse after he was afflicted with a stroke that left him bedridden.

With her job as a coffee picker, caring for her husband, tending to children and doing household chores, McKenzie reportedly found that she could not cope, and so her husband’s relatives came and took him to live with them.

That was two years ago, but she said she has still not been able to catch a break.

McKenzie had been living in the Corporate Area before her husband got sick and relocated to Content Gap, on lands owned by her grandmother, in a bid to avoid paying rent and to better manage her expenses.

Her first priority was establishing a roof over their heads, but that projection hasn’t exactly gone to plan.

McKenzie cultivates sugar cane and cash crops in the remote district to supplement her family’s income. However, she hasn’t amassed enough money to procure building material to get a start on constructing a proper dwelling.

“Things bad because what we work now is just hand-to-mouth,” she said of her predicament.

“The house leak and I have to set pan when it rain. I get likkle water from a neighbour and cook inna the house, or I use the coal sometimes.”

McKenzie said that efforts at getting help from various government agencies have borne little fruit, but she has acknowledged benefiting from the kindness of community folk, including her pastor’s wife.

She has also benefited from state welfare via the Programme for Advancement Through Health and Education (PATH), from which she receives money to cover the costs of her children’s uniforms and books.

“Me just want a roof over mi head fi me and mi children them. All of us sleep inside the house, but the smaller room leak more, so most of the time we sleep in one room, but it very uncomfortable, but me a try fi save up some money fi buy some blocks.”