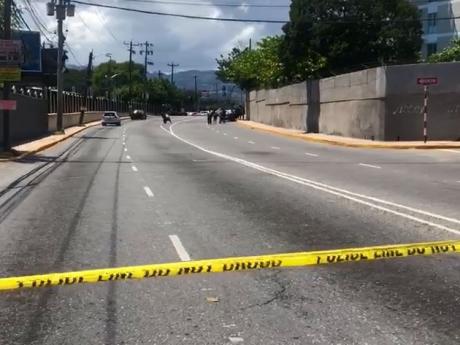 According to the police, while the cops sought to apprehend the men, they engaged the team in a firefight.

The police are reporting that two gunmen were shot dead and a third taken into custody following a daring shoot-out on Trafalgar Road in St Andrew this afternoon.

The police say two firearms have been seized.

The men, believed to have earlier killed a man on Old Hope Road, also in St Andrew, were intercepted by cops while seeking to escape. 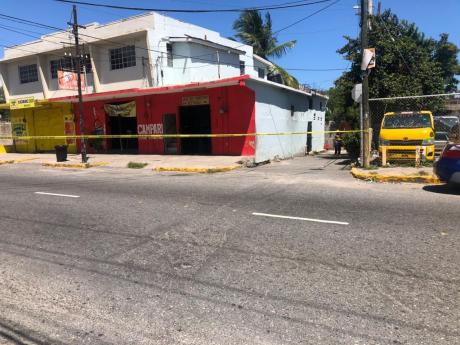 In Photo: The police cordon off the Travellers Rest Sports Bar in Swallowfield, St Andrew following a fatal shooting

The police say the Old Hope Road murder was reported to its Police Emergency Communication Centre, which then used the Jamaica Eye CCTV system to swiftly mobilise members of the Metropolitan Quick Response Team.

The police report that the vehicle was intercepted at the intersection of Trafalgar and Hope roads.

According to the police, while the cops sought to apprehend the men, they engaged the team in a firefight.

Investigators are now at the scene of a fatal shooting on Trafalgar Road in St Andrew. The police say the occupants of the vehicle are suspected to have earlier committed a murder in Swallowfield and were seeking to escape when they were confronted by cops. More details later. pic.twitter.com/UmMQOi0fqp

At the end of the exchange, two of the men were found suffering from gunshot wounds.

The Independent Commission of Investigations was called to the scene.