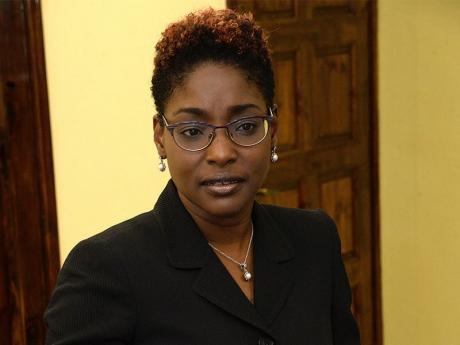 Monroe Ellis: She said at no point before Tuesday’s meeting was she informed that the internal audit was focusing on Information Communication Technology.

They wanted to know why she did not take part in an entrance and exit audit of her department by the Ministry of Finance and the Public Service.

There was also controversy about the scope of the audit done by the ministry with the Chief Internal Auditor Richard Dillon claiming that the auditor general presented a draft document on a disaster risk management plan.

Monroe Ellis said she was unable to confirm if it was a draft document that was submitted as her IT executive was unavoidably absent from the sitting.

“We have a document that I know I signed off on at an executive management meeting. The internal auditor did not communicate to me that he had received a draft document and he needed a final document. I can't speak to those issues. I would have to do further checks on them,” she said.

The auditor general also told the committee that at no point before Tuesday's meeting was she informed that the internal audit was focusing on Information Communication Technology.

It was the Clarendon Northern MP Dwight Sibbles who questioned why the auditor general was not present at the entrance or exit meetings for the audit of her department.

He asked the internal auditor if Monroe Ellis was at the entrance meeting and was told she was not.

“AG, I want to ask you that same question because the chief internal auditor gave the answer in a 'hear say' fashion. He is 'being told' and I am therefore asking you. Were you at the entrance meeting?” Sibbles questioned.

“Are you able to state why you were not at these very, very important meetings as the head of the department?” Sibbles pressed.

Monroe Ellis said she was unable to say why, noting that her absence from the meetings did not suggest that she was not aware of what had taken place.

“I would have received all the information,” she said.

That would irk Sibbles.

“I am fully aware that an exit and entrance meeting is one where the head of entity is to be present and where the head cannot be present it would be delegated and the head would be fully apprised of what happened at the meeting,” Sibbles responded.

He also said there was a gap as Monroe Ellis had indicated that she was aware of information coming out of the entrance and exit audit yet she claimed that the scope of the audit was not fully understood.

St James Central MP Heroy Clarke also pressed the Auditor General on her absence from the entrance and exit meetings before St Elizabeth South East Member Frank Witter suggested that Monroe Ellis be allowed to refresh her memory and report at the next sitting why she did not attend both meetings.