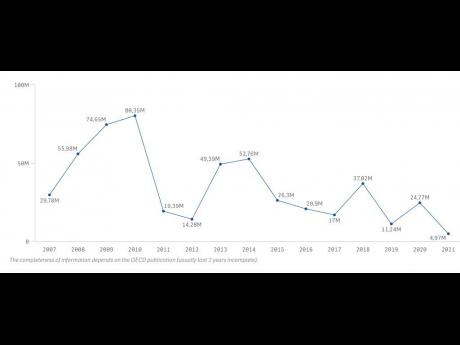 Contributed
Chart showing the aid disbursement to Jamaica between 2007 and 2021. 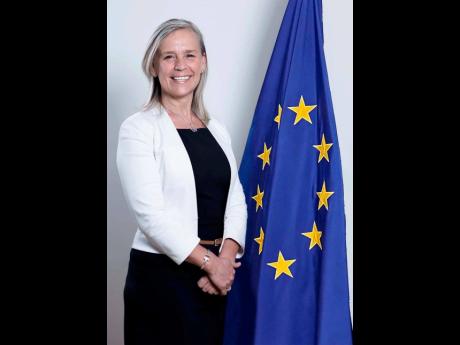 Marianne Van Steen, head of the European Union Delegation to Jamaica, has said that the powerful bloc will not be doling out money as it used to do in the past.

“I would very much hope that the European Union is not always seen in terms of aid,” Ambassador Van Steen said in an interview with The Gleaner.

Over the decades, the EU has been one of Jamaica’s sources of cash and concessions. EU data show that Jamaica has received a total of €711,569,143 in aid from the bloc since 2007.

The United Kingdom, which is no longer part of the EU, contributed €108.12 million, followed by France and Belgium with €46.01 million and €29.61 million, respectively.

So far this year, EU aid to Jamaica has reached €4.97 million.

Van Steen said Jamaica is one of the countries in the Americas that will continue to receive bilateral cooperation with the EU on top of regional and global assistance, which come from the bloc.

“We do not have the exact amount, but it will be a significant amount,” she said, disclosing that 17 countries within the Caribbean and Central America would not benefit from cooperation from the EU.

“There will not be like all of a sudden we will stop cooperating with Jamaica. That is not true,” the EU ambassador said.

Van Steen was keen to shut down any suggestions that there are strings attached to the aid Jamaica receives from the EU.

“I think that Jamaica is a sovereign country that decides how close it wants to be with any other country in the world. Of course, we are not going to tell you that you should be closer to us, to the United States, or to China,” she stated.

“I am going to tell you very straight, without blinking, that the European Union is one of those donors that does not put conditions [on aid]. We have never, ever done that,” Van Steen insisted, mentioning, though, that the EU has been accused of employing the practice.

She admitted, though, that many European citizens are of the view that the EU should insist on conditions for aid.

“We are not going to condition our aid on, say, EU would like Jamaica ending the death penalty … . Of course we wouldn’t do that; we have the right to say so, but we will not cut our aid because Jamaica hasn’t done so,” Van Steen asserted.