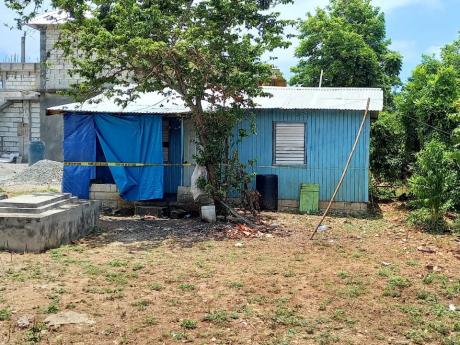 The house of Linval Lindsay and his wife Annette Gibson-Lindsay who were murdered in their community of Barracks in Manchioneal, Portland on May 12, 2021 - Gareth Davis Snr photo

A double murder has rocked the quiet community of Barracks in Manchioneal, Portland, following the discovery of two bodies early Wednesday morning.

The deceased have been identified as 55-year-old Linval Lindsay and his wife Annette Gibson-Lindsay.

Linval's body was found lying on a roadway near the couple's premises, while the woman was discovered inside their one-bedroom board house with multiple chop wounds to the face.

The police are theorising that the husband may have attempted to flee his attacker(s) but was chased and shot multiple times.

The scene is now being processed by police detectives.

With this incident, Portland has now recorded four murders since the start of 2021.