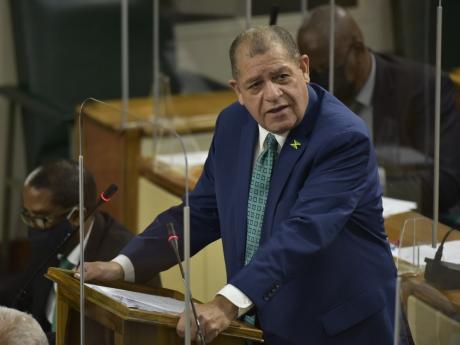 Industry, Investment and Commerce Minister, Audley Shaw, delivering his 2021/22 Sectoral Debate presentation in the House of Representatives on Tuesday, May 11, 2021 - Contributed photo.

The EXIM Bank plans to on-lend approximately $5.5 billion to the productive sector during the financial year.

Industry, Investment and Commerce Minister, Audley Shaw, made the disclosure during his 2021/22 Sectoral Debate presentation in the House of Representatives on Tuesday.

In addition, Shaw said that the Ministry has earmarked $600 million to provide affordable financing for micro, small, and medium-sized enterprises (MSMEs), which will be channelled through the EXIM Bank.

He indicated that just over $200 million of the provision will be immediately transferred as a result of the closure of the Micro Investment Development Agency, with a further $400 million to be made available later this year.

Shaw said funding support was being extended to MSMEs in light of the fact that “with all its potential, regrettably, this sector has traditionally been affected by access to finance”.

“It is worth reiterating that the MSME sector is indispensable to achieving broad-based and inclusive growth,” he said, noting these operations represent 90 per cent of the private sector and are involved in all productive areas of the economy.

Shaw also acknowledged and expressed gratitude to Prime Minister, Andrew Holness, and Minister of Finance and the Public Service, Dr Nigel Clarke, for facilitating a $5-billion allocation from the Government's $60 billion Social and Economic Recovery and Vaccine (SERVE) Programme to the business sector, which, he said, will be administered by the Development Bank of Jamaica.