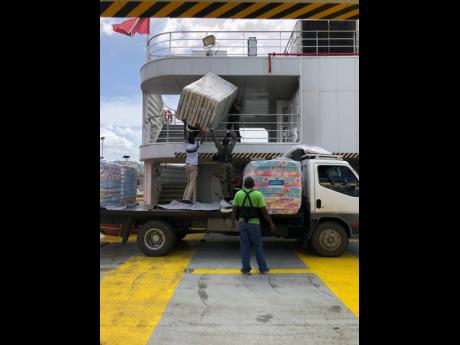 Contributed
500 mattresses are loaded for distribution to displaced persons in Saint Vincent. 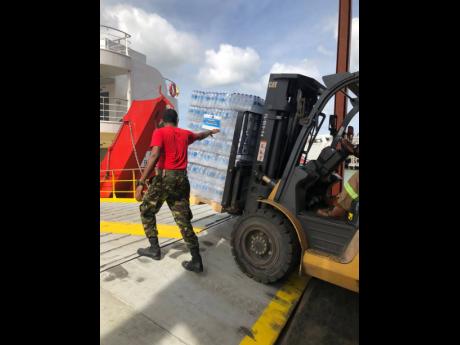 Contributed
Cases of water are loaded onto the vessel headed for Saint Vincent with relief supplies.
1
2

VINCENTIANS IMPACTED by the eruption of the La Soufriere volcano are receiving relief to the tune of US$135,000, courtesy of a project run by the Caribbean Development Bank (CBD).

Called the Volcano Ready Project, the initiative was started in 2017 under the Community Disaster Risk Reduction Fund (CDRRF) and is administered by CDB with financing from Canada and the European Union.

Supplies – including 500 mattresses, 1,500 cases of bottled water and fifty 800-gallon water tanks – were delivered to the country on April 29. Equipment – including seismic stations (seismometers, recorders, digitiser, power supply and case), wireless ethernet radios, remote monitoring camera, as well as GPS antennas and receivers – are being procured.

“We remain truly grateful for the CDB’s support as we have seen where the work we have been implementing over the last three years to increase public education, community readiness and improve the volcano early warning system has contributed to reducing the loss of lives in response to the eruption,” said Monique Johnson, project manager of the Volcano-Ready Communities in the St Vincent and the Grenadines project.

“Many initially would have thought that the volcano readiness was a far-off concept, but we have now seen how all the preparation we have been doing has helped. It is also critical that we boost the monitoring of the volcano at a time like this so we are not caught off guard in the future,” she added.

She also credited CDB for its ongoing role in helping the project team to convert one seismic station to seven when the focus shifted to volcano monitoring and early warning in December 2020.

“Our Belmont Observatory where scientists currently sit and do the monitoring has been resourced with remote monitoring equipment through the support from the CDB. We are currently keen on using the extension period to invest in a drone, which will improve remote monitoring and damage assessment while keeping the seismic team at a safe distance and allowing us to capture data to better understand the volcanic hazard and exposure,” she added.

CDB’s project manager for the CDRRF, George Yearwood, explained the community engagement approach employed in their support of the project.

“Much has been done under the project to equip some of the island’s most vulnerable in the 12 communities closest to La Soufriere to secure their livelihoods and be prepared for evacuation. Once the volcano erupted, we knew that we had to offer more support,” he said.

Aiken noted that from early in the project, surveys were utilised to get feedback from the community and continuing in such a way that the community is involved in assessments of livelihoods risks and threats, community profiles, livelihood inventories, stakeholder maps, and seasonal calendars.

This level of engagement also helped the project to determine effective ways to engage different segments of the community.