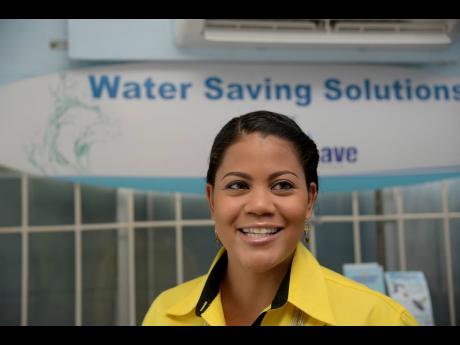 Spence: "If our water is left unmanaged, we’re going to undercut the very development that we are seeking."

The Government is being urged to adopt water efficient product standards as part of efforts by Jamaica to maintain a sustainable supply of the commodity.

Spence said that the move would see the labelling of consumer products that have been certified to meet particular standards.

By doing this, she argued that this would promote water efficiency in the country.

According to Spence, in the average household, approximately 24 percent of water gets flushed down the toilet, and that the bathroom fixture remains the largest consumer of water in homes.

Additionally, she said that another 20 per cent is used in showers, 19 per cent by faucets, 17 per cent in clothes washers, 12 per cent attributed to leaks, and the remaining eight per cent covers other uses, including outdoors.

“Generally, these standards impose a maximum on the amount of water used for a toilet flush - gallons per flush or litres per flush - and for faucets, shower heads and other water use equipment - gallons per minute,” she explained, adding that the average toilet in Jamaican homes uses one and two thirds to two gallons of water per flush.

Spence asserted that with the installation of water-efficient fixtures, that amount can be reduced by half without compromising aesthetics, function or comfort.

These standards exist in the United States, United Kingdom, and Australia in the form of WaterSense, Waterwise and WELS, respectively.

“We need our own programme and standards for these same flush and flow rates. Efficiency is the cheapest source of new supply. If our water is left unmanaged, we're going to undercut the very development that we are seeking,” Spence reasoned.

The issues of excess water use or leaking pipes can be addressed by investing in efficiency, she asserted.

Spence reasoned that changing the aerator in showerheads as well as in kitchen and bathroom faucets can save up to 65 per cent of the water used by each fixture.

“They just use air and less water and it feels just the same. Water efficient technologies are the single most cost-effective measures we believe that Jamaicans can adopt to address water management before even needing to change behaviour,” she pointed out.

Spence added that leak detection technologies, pressure reduction, and rainwater harvesting can make a big difference in Jamaica's water footprint and determine the future availability to meet the country's demands.

Further, she called for the adoption of a minimum standard for water-efficient fixtures and fittings, to be mandated in housing developments.

Arguing that water-efficient homes are less vulnerable to fluctuations in supply, she said: “We must build and design homes that prioritise water efficiency.”

Spence explained that the dots must be connected with energy efficiency as every gallon saved means one less gallon to be pumped, treated, and transported.