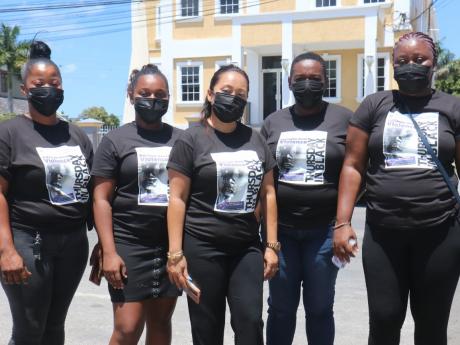 From left: Tia Rainford, Shelly-Kay Mitchell, Julian Chang, who is the founder of the Westmoreland Trauma Hotline Foundation, Judith Hutchins, and Norma Creed participated in a silent protest against gender-based violence in Westmoreland on May 13, 2021 - Ashley Anguin photo.

Groups of women today staged silent protests in a move to call for action against gender-based violence.

Dressed in all black, the groups, which assembled across the island, dubbed today “Black Thursday” as they mourn acts of violence in the country.

Wright, who is currently on a two-month leave of absence from the House of Representatives, has found himself in a whirlwind of controversy ever since a video surfaced alleging that he physically abused a woman.

However, the police had indicated that Wright and Tannisha Singh, who both made reports of assault against each other, no longer wished to press charges.

With both parties refusing to continue the matter and the video footage inconclusive, the cops pulled the plug on their investigation.

Citing recent cases of abuse, founder of the foundation, Julian Chang, says gender-based violence is too high in Jamaica and needs to end now.

"For the past weeks and months we have had some real gruesome stories within the newspapers about a child being missing, about a 21-year-old killing, a 14-year-old, a baby father killing a baby mother, even a member of parliament was alleged to have been in the act [domestic violence] as well, so it is reaching to some proportional levels now," Chang said.

She is hoping that today's demonstration will bring more attention to the issue and prompt more people to take action.

"It is in our homes. It is in our environment. It is within our schools. It is a disease that has plagued us over the years and we need to come to terms and understand that we can now talk about it to see how best we can move forward," she added.

And in St Catherine, women turned up at the St Catherine Municipal Corporation to press their case. 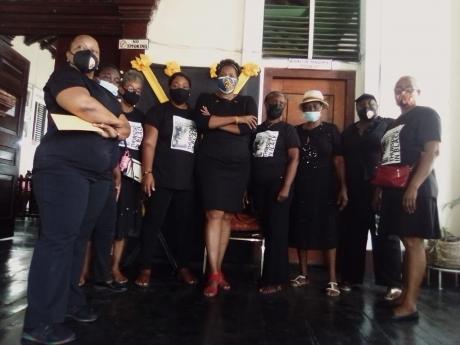 In Photo: A group of women gathered at the St Catherine Municipal Corporation to protest against gender-based violence

The group delivered a letter to the corporation's chairman Norman Scott in which they outlined their concerns.

A call was made for the Government to do more to address the problem.

"After reading this letter and as one who has been personally affected by violence, I want to personally commend these ladies for their efforts to stem gender violence. It is a very good gesture and men, women and children must be included as violence adversely affects us," said Scott.

Speaking on behalf of the group, Karen Johnson, said the women want to see an end to gender-based violence.

"I have seen too many acts of violence taking place especially against our females and it is cruel. One that stands out is the murder of Khanice Jackson which still haunts us. Acts against our children is also heart-rending, therefore we've become overwhelmed. [And] That's why we are protesting against these activities," Johnson said.