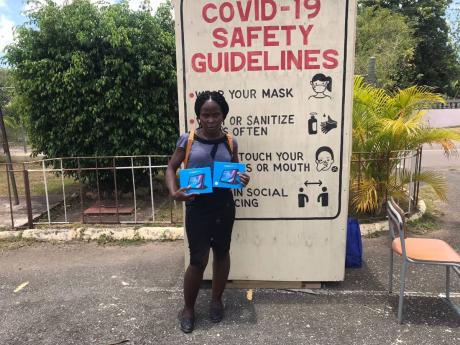 Contributed
Nichael Hyman shows off the two tablets donated to her sons to keep up with online classes by Clarendon North Central MP Robert Morgan. 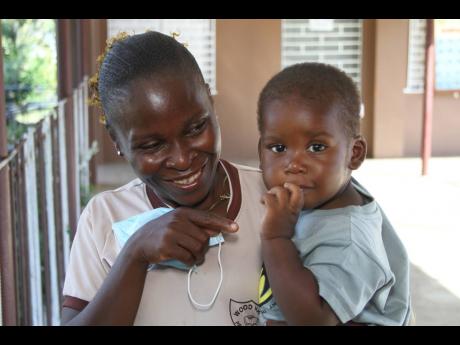 Things have turned around for Nichael Hyman, a mother of three from Wood Hall in Clarendon whose plight struggling to have her two oldest children keep up with online classes on her phone was published in The Gleaner last Saturday.

Hyman is now ecstatic as Clarendon North Central Member of Parliament Robert Morgan, who also hails from the community, came to their rescue.

“When I got the call that I was going to get the devices, I was feeling much better,” Hyman told The Gleaner. “However, I was not excited until I received them.”

With the joy evident in her voice, Hyman said that she could literally feel months of “pain and stress” easing off her brain.

Tears almost flowed when she took the tablets home to the children as they started to dance.

“Dem puddung one piece a dancing! They were so excited, and I am so very thankful for them,” she shared.

It was a joy for her to see them buckling down to do their work on separate devices.

“None of them have to be fighting for any device or anything. They can do their work now,” she said as she thanked Morgan for making it all happen.

Morgan himself tweeted the news: “We have good news. You may remember the case of Nichael Garcia Hyman who is the janitor and coach at Woodhall Primary. Today we delivered the two tablets she needed for her children and have made efforts to find a coaching course for her to enroll in.”

Commenting on the coaching course, Wood Hall Primary Principal Elisa Craig said that the MP reached out to her to coordinate that aspect.

“To date, we have been successful with connecting with the registrar of G.C. Foster College, where we have been instructed to complete the application for Miss Hyman, where she will be able to do an associate degree in coaching,” Craig told The Gleaner.

Hyman’s portfolio has been prepared, and she is now anticipating a call for an interview as early as next week.

“We thank all the stakeholders who were instrumental in making this possible and all the contributors to the paradigm shift in Miss Hyman’s story. We want to say a big thank you. It has made a significant change in her life,” Craig stated.