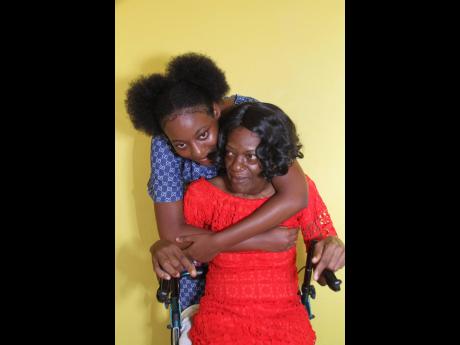 Nathaniel Stewart/Photographer
Spanish teacher Atonate Peters, who woke up one morning in 2019 to faded sight,which threw her life into a tailspin, gets a loving hug from her 17-year-old daughter Shoze Cammock.

For 21 years, Antonate Peters honed her skills in classrooms until one day in February 2019 when she woke up blind.

Baffled by the suddenness of it all, Peters recalls that it was a traumatising experience when she could not even find her way out of her room.

“I just woke up one morning and I couldn’t see anything. It was very traumatising. I had to call my daughter because I couldn’t see the ceiling,” she told The Gleaner.

Upon realising that she had lost her sight, the 45-year-old said she began praying for mental strength to walk this new dark road.

“I had to pray first and ask God to touch the brain ‘cause a person know that they used to work and do everything for themself and this just happen, it could be a very traumatic thing for you ... . It’s a good thing I’m a Christian,” she said.

The Spanish teacher, who has taught at several primary and secondary schools in Clarendon and St Catherine, misses the classroom dearly.

“I miss interacting with the kids and imparting knowledge to them because having a second language is very important,” she said.

“I really want my sight to be restored and to finish what I started – helping the nation’s children and try to mould them and guide them to a better future, “ she told The Gleaner.

Peters said that her spirit has been kept alive by calls from her colleagues, informing her about the happenings at school, but with the COVID-19 pandemic forcing classes online, she said those stories have dwindled.

Currently living in Rocky Point, Clarendon, the educator said that the traumatising ordeal has changed her life drastically, dimming her ability to fend for herself and her only child, to whom her care has been entrusted for the past two years.

“She’s the one who had to do everything because I didn’t have anybody else,” said the mother.

A community-based organisation has since assigned help for the family.

Her 17-year-old daughter, Shozé Cammock, described her mom as strong and independent.

Shozé, a fifth-form student, said that despite the challenges, she is happy to be of help to her mom, who has since lost mobility in her legs.

She added that she has been forced to find a balance between her new responsibility and school.

“It’s not easy because I take care of mom, and I didn’t have any Wi-Fi, so I wasn’t able to go to the online classes,” said Shozé.

With no income, her mother shared that the family is sustained by the goodwill of friends and her church family.

“Life has changed drastically for me because I had to move from where I was, and I was just going around ‘cause I don’t have anywhere for myself,” Peters said, recalling the deplorable condition in which she was living up to a few weeks ago in a one-bedroom structure in the neighbouring Lionel Town community.

She said the premises lacked basic commodities, with no proper bathroom or kitchen facilities.

She is grateful for the intervention of the community-based charity group Heroes Outreach Foundation and humanitarian Leon McNeil of Leegates TV and Entertainment, which has managed to secure a more comfortable space for her family.

McNeil, who advocates for charitable causes on social media, told The Gleaner that he was moved when he saw the teacher’s living conditions some weeks ago.

“When I highlighted it, one of my donors said she can donate a place for her to stay until we start a place for her,” he added, pointing to plans to build a permanent home for Peters.

He is imploring others to come on board and assist.