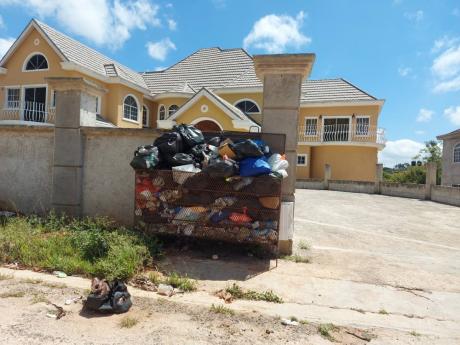 Overflowing garbage skips, intolerable stench and rodents have made the lives of some Mandeville residents living in the Avondale Heights community unbearable.

The residents say they are forced to find alternative means of disposing their garbage when collections are not made within a four-week period.

According to one resident who requested anonymity, her garbage has not been collected for the last seven weeks, inconveniencing her family and threatening the health of residents.

“It has been more than five weeks; I would say it’s about seven weeks, since they have collected. I hear they came Tuesday, but I had already disposed of my garbage. They take weeks before they come ever-so-often and by the time they come, the rats damage the bags and what falls out of the bag is not picked up by the garbage collectors,” said the concerned resident.

She continued: “It is really bad, it is so bad, garbage is just packed up everywhere and the thing is when they come after five or seven weeks, there is no timeline and no guarantee for when they will be back. It is just hope you have that they will return.”

With a serious concern for their health, the residents say they are not only contending with the unbearable stench, but with the rodents it attracts.

“When the garbage stays there so long it breeds big rats and then it breeds mosquitoes and it is just horrible. Something needs to be done, because this is not right. I know schemes sometimes have these issues but it shouldn’t be. We only know garbage will be collected when I hear the truck coming. There is no pattern for collection and that shouldn’t be.” However, the councillor for the area Jones Oliphant said the lengthy period between collections is not entirely true, as the National Solid Waste Management Authority’s (NSWMA) Southern Parks and Market (SPM) has never waited that long to facilitate collection.

He also said he has received no complaints of the poor garbage collection in the area.

But a worker in the area quickly refuted those claims, stating that only those who live and frequent the area can speak to the issue which has become a serious cause for concern.

Executive Director of the NSWMA Audley Gordon confirmed that there are backlogs across the parish due to an unavailability of fully functional units, but stated that there are no reports indicating that collections have not been made weeks on end.