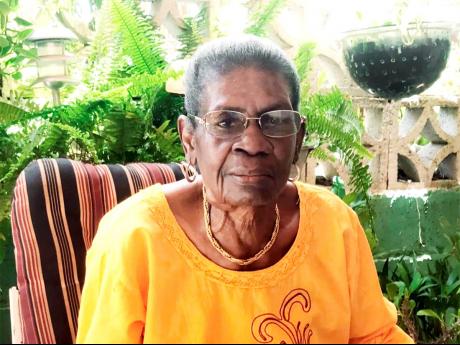 Contributed
Barbara Green, mother of the Burger brothers, sits back to relax and enjoy the treat prepared by her sons. 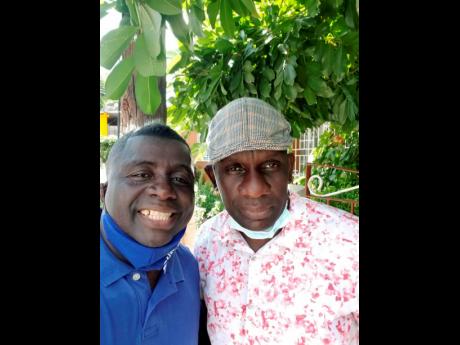 Contributed
Wesley ‘Burgerman’ Burger and Carlyle ‘Neil’ Burger take a quick photo amid all the excitement of the Top Range Mother’s Day treat. 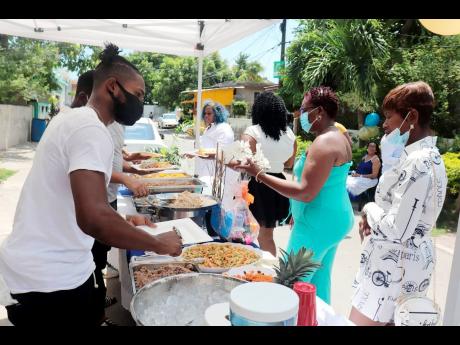 Contributed
Young men in the community help to plate the delicious meals as the women, who were all dolled up for Mother's Day, collect their meals. 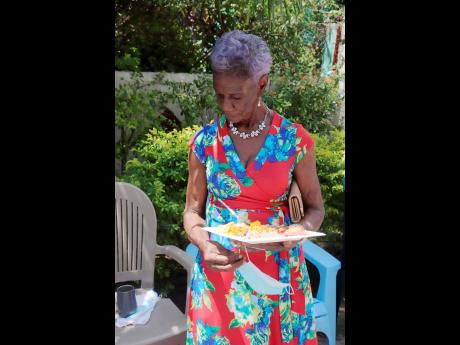 Contributed
This lady in red, known to everyone in the Top Range community as Miss Brown, stood out in her dress decorated with flowers when she dropped by for her treat.
1
2
3
4

Last Sunday, the matriarchs in the community of Top Range in Mountain View, where the brothers were raised, were treated to a full-course meal specially created by Carlyle Burger for a second consecutive year.

Describing the initiative as “proper and purposeful”, Burgerman said the idea to prepare a treat on Mother’s Day “was born out of a want to convert a tragedy to a tribute”, and is proud that his brother, who he affectionately referred to as Neil, not only for devising an event that honoured mothers, but for investing in carrying it out safely and successfully.

“Neil is more than passionate about doing this,” the RJR 94FM presenter said. “Praise or no praise, he is going to make it happen. I watched him organise the young men from our community to help with sharing the food, all of which was prepared by him and done out of pocket, just so he could honour the mothers.”

Burgerman was responsible for spinning old hits as the women in the community passed through to collect their Mother’s Day meals and, as he did so, could not help but reflect on the life of their older brother Radcliffe, who was murdered on December 28, 2019. The radio host shared that the incident is still hard to digest a year and a half later, but observing and participating in the treat planned by another sibling was refreshing and therapeutic.

According to Carlyle Burger, the inspiration to host a treat was to provide comfort, similar to that which was offered to their family during their time of mourning and loss, and was also done as a show of gratitude.

“Our mother, Barbara Green, lost her first son at the end of 2019; I never wanted to go over to the community just to have a meal with her on Mother’s Day following that tragedy. I thought it best to invite friends as well as persons from the community, as they were very supportive during our time of loss,” he told The Gleaner.

The first time Carlyle Burger hosted the treat, about 50 women had received meals. Using lessons for life, provided by their mother, a menu of savoury dishes was put together, including a saltfish rundown appetiser served with a touch of crushed banana, and for the main course, oven-baked chicken in passion fruit sauce, sweet and sour fish, ackee and salt fish, along with gungo rice and peas, roasted breadfruit and macaroni salad. At the end of last week’s treat, he said 80 women would have had a “taste of his hands”.

For dessert, no holds were barred, as Burger prepared old-fashioned sweet potato pudding and bread pudding with a modern twist with Irish rum cream.

“One way to bring people together and show love is with the presentation of food, through the taste of food and the heart that you give food with,” he told The Gleaner. “I never went to a cooking class; my mother taught me. I figured it was the best way to give back to the people. I must note, the sweet potato pudding made the traditional way, like they say, with ‘heaven a top, hell a bottom and hallelujah in the middle’, is one of the gifts I will never sell, just because it brings joy to those who eat it.”

Carlyle Burger’s philanthropy does not stop at treating the Top Range mothers, he shared. He partnered with journalist Emily Shields, who launched her Shields Meals On Wheels programme, to provide four families with elderly members with a well-cooked meal. Burger, who was once the owner of an authentic Jamaican restaurant in the Corporate Area, is further inspired to do an islandwide monthly meals distribution service to those in need.

“The aim is to deliver 100 meals every last Sunday of the month throughout all 14 parishes. The necessary equipment such as the stove and other things have already been acquired for this project,” he shared.