Stick with each other: Markland Edwards takes a wife 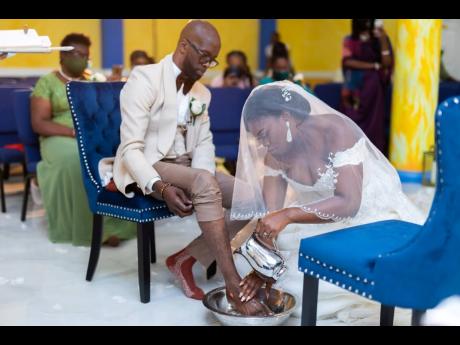 Contributed
Andrea Edwards washes the feet of her husband, Markland, during their wedding ceremony. 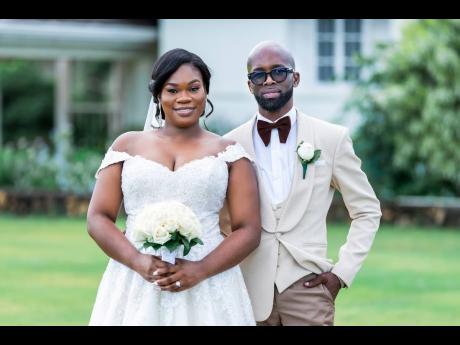 “She was wearing a white button-down top and khaki shorts with wedges and her natural hair combed in a bun,” said radio announcer Markland Edwards as he described the first time he laid eyes on banker Andrea Channer.

It was 10 years ago, and the popular media personality was engaged in one of the many RJR Cross Country Invasion roadshows he hosted. The usual excitement of the roadshow, though, was not enough to divert his attention from the beauty he beheld during a stop in Whitehouse, Westmoreland.

Briefly describing his first encounter with the Manchester native, Andrea, who would later become his wife, Edwards said:“I couldn’t take my eyes off her, and I looked out for her at every stop along the way until I finally got the chance to speak with her. We exchanged numbers, and as they say, the rest is history.”

The emcee extraordinaire strongly believes that the decisions to wed his lady love and on May 7 were solely orchestrated by God, having received many unique confirmations.

“They were so many things at play. We’ve prayed and made specific requests of God, which we saw manifested over a period of time, especially during the last four months. Just as how our engagement [on] February 27th was a surprise to her and many others, so was our wedding date.

“When I woke up Friday morning, did my devotions and was checking a few messages, RJR Cross Country Invasion Launch, Friday, May 7, popped up on my IG as clear as day, and I called Andrea and said to her, “Look at IG, look what’s being launched today,” he said surmising that the launch date of the event at which they had met a decade ago synching with their wedding day was a final confirmation from God that they were meant to be.

The couple pledged their love and commitment to each other in the presence of their mothers, relatives, and close friends during an intimate ceremony in St Andrew.

They shared that the ceremony was highly punctuated with Christian rites and sacraments, including the recital of Bible verses, partaking in the Lord’s Supper, and the washing of each other’s feet.

Sharing on each activity, Edwards said: “As Christians, we tend to skip certain scriptures in the Bible, but after reading Song of Solomon on my radio show for Valentine’s week, I said to Andrea, ‘That’s the scripture we’re going to use on the wedding day as Song of Solomon 7 opens up with a beautiful description of the woman’s beauty, body, face, head, hair, breasts, naveln and feet. It also speaks of the beloved’s desire, the longing for intimacy, and closes with the desire for intimacy, which marriage is all about.

“1 Corinthians 10 seeks not only to commemorate the death of Christ, but also to signify, seal, and apply to believers all the benefits of the new covenant. It also represents the mutual communion of believers with each other, in this case, husband and wife.

“The feet-washing ceremony is a Christian-based tradition, which is representative of Jesus washing the feet of his disciples in John 13:1-17 as a symbol of love and humility. Hence we did likewise to show our love [for] and humility to each other.”

The wedding was officiated by The Reverend Astor Carlyle, Gary Harriott, and Carlington Keene of the United Church in Jamaica and the Cayman Islands as well as Prophetess Deborah Elvy of the Shiloh Courtroom of Heaven International Ministries and featured a surprise performance by award-winning gospel artiste Jermaine Edwards.

Imparting a word of advice to other married couples, the newly wed Edwards shared: “Stick with each other. Cover each other, knowing that the enemy of our souls is not happy when two hearts are joined in unison. Our love for each other is summed up in 1 Corinthians 13. When we apply the word of God to our marriages, out of this come families. When we have strong families, we’ll have better homes, better communities, and a better society.”