Man dies after being hit by car in St Thomas 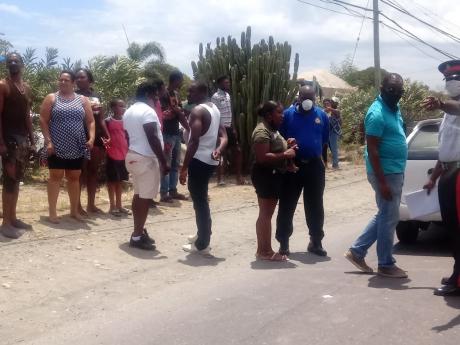 A policeman and onlookers along the St Thomas main road after a man was hit by a car on May 17, 2021. The man succumbed to his injuries - Contributed photo.

A St Andrew man is dead after being hit by a motor car along the St Thomas main road this afternoon.

He has been identified as 57-year -old Wayne Ewin, who was employed to the National Water Commission.

It is reported that about 12:15 Ewin, who was travelling on a Toyota Coaster Bus from Kingston, exited the vehicle upon reaching Albion in St Thomas.

He was attempting to cross the road from the rear of the bus when he reportedly walked into the path of a white Toyota Corolla motor vehicle which was travelling in the opposite direction.

He was hit by the vehicle, killing him on the spot.

Ewin's death is the third road fatality to be recorded in St Thomas since the start of the year, with the second occurring just a few days ago.

Over the weekend, two pedestrians were allegedly hit by a car being driven by man said to be under the influence.

This resulted in the death of 17-year-old Aaliyah Jemison of East Albion in the parish.

Her cousin has been hospitalised.