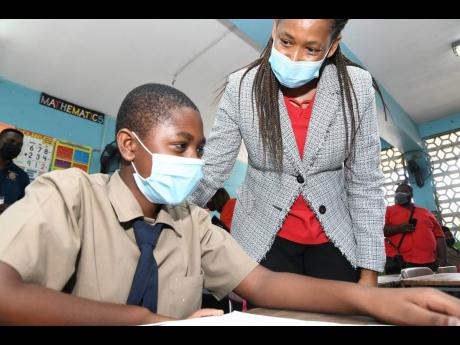 Rudolph Brown
Jasmine Kennedy, acting director for Region One in the Ministry of Education, Youth and Information engages Malachi Walters, a student of the Louise Bennett-Coverley All-Age School, on the first day of the resumption of face-to-face classes last Monday. 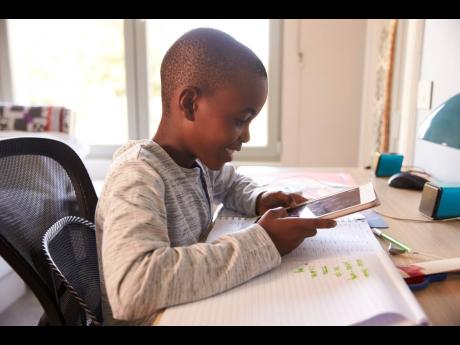 Prime Minister Andrew Holness has acknowledged that many of Jamaica’s students are not learning at the level, pace, and stage at which they should be as a result of the disruption to traditional learning methods by the COVID pandemic.

Holness said that the Government is partcularly concerned that this cohort of grade-six students are behind as they transition to grade seven, but the Government is not going to allow that to affect the remainder of their education cycle.

The prime minister gave the commitment as he addressed a gathering of students and parents at the Calabar Infant, Primary and Junior High School in central Kingston on Friday during a tablet-distribution ceremony. He said: “I want to give you that assurance as children, and I want to give that assurance to your parents. It is something that is near and dear to my heart and I am going to ensure that you are not adversely affected because of the measures that we have had to put in place to control the pandemic.”

Holness also emphasised that the Government is developing a new framework for broadband Internet access across the length and breadth of Jamaica to ensure that every Jamaican household can get access whether through wired or wireless service. He says the planning is far advanced, and the programme itself should be at an advanced stage of completion within two years.

The prime minister, in speaking directly to the students, said that the new world in which they will be living is a digital one that requires a highway to carry information. That highway, he said, is the Internet, and the devices are the vehicles.

In the short term, Holness said that the focus is on Internet penetration while emphasis is also placed on increasing access to devices by students. He said current estimates indicate that about 70 per cent of learners have Internet access but at varying speeds. This is why the Government must ensure that irrespective of socio-economic status, every student can access the Internet. He said the Government is procuring 15,000 laptops for students between grades 10 and 13. An additional 16,000 tablets are being procured for students between grades seven and nine.

Meanwhile, the prime minister said that 12,000 households have redeemed vouchers under the Own Your Own Device programme.

Holness commended civil society and the diaspora, particularly the consular general of Jamaica to New York, who mobilised diaspora support for the success of the One Tablet or Computer Per Child programme, which has pooled 16,000 tablets and 785 laptops.

The prime minister handed over tablets and other devices to about 40 students of the Calabar Infant, Primary and Junior High. The school was also gifted a printer, which was made possible through Printware Online.