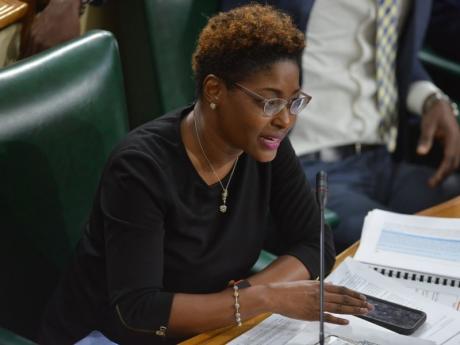 In an unusual request, government members of a parliamentary committee this morning demanded to know the name of a Gleaner journalist who spoke with Auditor General Pamela Monroe Ellis on a matter being deliberated in Parliament.

It comes as concerns mount over how government representatives on the Public Accounts Committee (PAC) have been treating Monroe Ellis, widely respected for her damning reports which have unearthed scandalous and corrupt activities across state bodies.

“Can the Auditor General tell the committee who from The Gleaner contacted her?" asked Robert Miller, a first-time member of the Lower House.

“I'm not going to provide that information. I generally do not provide information at the committee when names are asked. If the member wants to know, then I guess a letter can be written and I'll provide the information,” the auditor general responded.

The exchanges have been very tense, with PAC members, notably Heroy Clarke, last week chiding Monroe Ellis for being unable to say then why she missed the January 29, 2020, exit interview dealing with the audit by the ministry.

She was expected to provide answers this morning, but from the outset, government member Dwight Sibblies, another Gordon House newbie, raised his discomfort that answers were reported in today's edition of The Gleaner before being discussed by the PAC.

It was his first question to Monroe Ellis: “Did you communicate with the media with regards to the question that we had asked?”

Monroe Ellis confirmed that she was contacted by the reporter but only asked to verify the January 29, 2020 date of the interview.

“I was asked nothing else. I provided no additional information,” she added.

However, the Clarendon Northern MP went further and questioned Monroe Ellis on whether she would agree that “based on the information in the article, it seems to have come from your office”.

“No,” the country's top auditor responded.

“I see nothing in that article that would suggest that information came from my office. I cannot be asked to answer for a Jamaica Gleaner article.”

Miller, the representative for St Catherine South Eastern, wanted more, including the date and time when the reporter called the auditor general.

Clarke, another government legislator, was also not happy with the auditor general's response.

“Parliament supersedes all court … and when members who are employed to Parliament are brought before Parliament to answer questions, we expect to get the answer,” he said.

Lothan Cousins, an opposition member, did not support the line of questioning and asked: “What is the probative value of asking the auditor general who she spoke to?

“If she proffers an answer to that, can we summon that person here? No.”

The government members backed down after senior lawmaker and opposition member Dr Morais Guy noted that over his near two decades of PAC experience, the practice of the Auditor General's Department not to name persons was never challenged and should not be done in this instance.

“To what extent would the members of this committee need that information for?” he queried, to which no answer came.

“If the reporters in this country … have started on a route now, or some, to become investigative reporters, why is it that we are, as this committee, seeking to determine who was it who spoke to the AuG?”

The PAC chairman read into the records questions sent Monday by The Gleaner to Gordon House and responses provided, which formed the basis of today's article.

He later ruled that Monroe Ellis should not answer Miller's question.

The auditor general missed the exit interview with the finance ministry because of a PAC meeting scheduled for the same day.

Jamaica is highly ranked for its level of press freedom.

Earlier this month, France-based Reporters Without Borders reported that Jamaica was ranked seventh out of 180 countries on the World Press Freedom Index, down from sixth in 2020.

The Jamaica Accountability Meter Portal tweeted today that it was “concerned” about “the focus and the line of questions by members of the PAC from last week and now today that leave much to be desired".