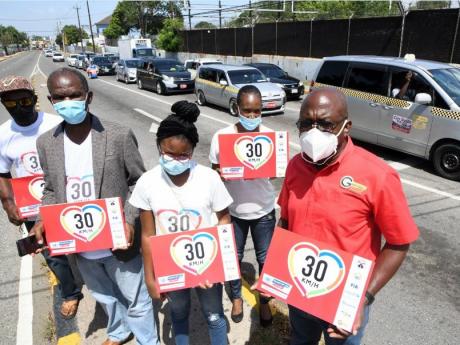 Egerton Newman (second left), President of the Transport Operators Development Sustainable Services, and Alphonso Grennell (right), Managing Director of Grennell's Driving School, are among a group that gathered at the intersection of Trafalgar, Hope and Waterloo roads in St Andrew on Tuesday, May 18, 2021. The group was calling for a reduction in the speed limit to save lives – Rudolph Brown photo.

A small group headed by President of the Transport Operators Development Sustainable Services (TODSS), Egeton Newman, today staged a demonstration at the intersection of Trafalgar, Hope and Waterloo roads in St Andrew calling for the authorities to cut the speed limit in built-up areas as a means to reduce fatal crashes.

Up to May 17, there were 176 road fatalities, including six passengers in public passenger vehicles (PPV) and one PPV driver.

The United Nations has reported that a child hit by a car at 30 km/h can survive.

Further, the 2020 Stockholm Declaration called for a focus on liveable streets where vulnerable road users and vehicles can coexist.

“In my sector, we think it is important that we do well in promoting this and see how best the government can accept this as a regulation for the public,” said Newman.

The 6th annual UN Global Road Safety Week is being commemorated under the theme, “Streets for Life”.

“The end goal is that we want less fatal crashes. Hope Road to me is a hotspot not only for fatal crashes but for major accidents. Some 300 taxi men ply this road every day and we believe having a 30 km/h zone well regulated and well enforced, we think we can reduce accidents on this thoroughfare,” Newman explained.

He added that it is a “firestorm” because some operators are of the view that they cannot drive at that speed.

“They say they have to drive faster to mek ah money but the fact is we have to do something to reduce fatal crashes on our roads. If it is a law and if it is enforced, they will have to be compliant,” the TODSS boss said.

Managing director of Grennell's Driving School, Alphonso Grennell, who was a part of the small group, believes the situation on Jamaica's roads can be completely different if drivers work together.

“If we have taxi drivers who want to make a difference on our roads, we can offer training to make them far safer than some of them are,” Grennell suggested.

“It's a good plan. I talk about it [reducing the speed limit] every day because I've been on the road and I see how the taxi drivers operate,” he said.

Andrew McLeod has been plying the Cross Roads to Mountain View route for over two decades.

“For you to drive 30 kilometres, go up di road and come back, it nuh mek nuh sense. Yuh not gonna mek nuh money either because you're moving so slow and there's an amount of money that you have to try to earn per day and you're not gonna reach that target. We will be moving like turtles on the road,” McLeod said.

Another operator Raymond, who has been in the taxi business for 21 years, told The Gleaner that there are other issues that TODSS should be addressing instead of pushing for a reduction in the speed limit.

“That is not an important matter right now. Gas price ah kill we, a that him fi address. I live in Constant Spring and when di gas station put up dem price, me cyah buy it. Me haffi come Cross Road come get it,” he lamented.