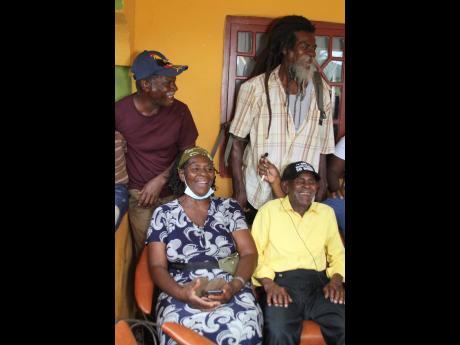 Nathaniel Stewart
Centenarian William Jennings (sitting right) of Rock River, Clarendon shares a light moment with three of his children Veda (sitting), standing are: Castel, and Earl during a function held at his home on Saturday to celebrate his 100th birthday. 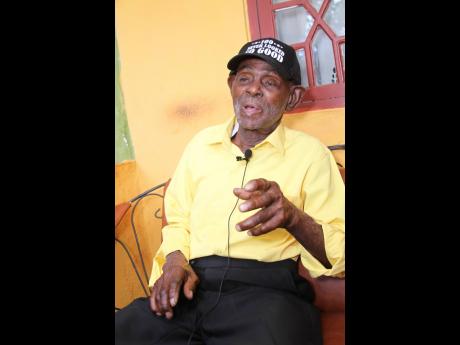 “One hundred never looked so good.” That was the caption on the cap sported by centenarian William Jennings when The Gleaner visited his home in Rock River, Clarendon, last Saturday.

Jennings, who was born on May 18, 1921, spent his former years ploughing lands and planting acres of pumpkin, yam and cocoa in his rural community.

The vibrant, high-spirited centenarian credits the absence of what he described as “fertiliser food” from his diet for his long life, adding that he managed to stay fit by virtue of his hard-working nature.

“Me do hard work, every work that a man can pick out right yah now, me do it. Me dig ground, me dig yam head, me plant cocoa ... everything.”

He told The Gleaner that he also had his eyes set on developing his carpentry skills, but his dreams were disrupted after losing his sight over two decades ago.

Jennings, who asserted himself as a disciplined person, lauded his parents for moulding his character .

“I grow ‘gainst good parents and them nuh teach me nutten that’s wrong. When I ketch to a age as 14 ... you cyaa play gig (spinning top) in the yard on Sunday. You cyaa do nothing but go church or siddung,” he said

Jennings said he was adamant in instilling the same values and discipline in his children.

“I try to grow them the best me can. I don’t rough them but I strict ‘gainst them,” he said.

He spoke feelingly of his wife of four decades, Verna, who he said is the pillar behind his baptism and Christian faith.

His children lauded him as a disciplinarian who was relentless in his efforts to provide for his family.

His daughter Veda said, “At 72 years old the discipline that my dad taught me, that’s what keeps me going and it’s a blessing. I just thank God for him.”

Her brother, Leonard, a detective inspector in the parish, conceded, adding, “The discipline that he has taught us is with me today. He always tell us that people are the most important resources in this world, so if you don’t treat people good, then you will not make it in life.”

“He always tells his children that the key is to be honest in life, and he always tells us what goes around comes around and we always stick to that,” Jennings’ daughter Audrey said.

“He’s a very good dad, and there’s no time you ever come and he doesn’t make you smile,” she added.